The Kaduna State, Governor, Nasir El-Rufai has announced the appointment of five new Permanent Secretaries and deployments of senior officials following the exit of three permanent secretaries from the public office.

The Governor in a statement released on Tuesday said the appointment of the new permanent Secretaries will fill vacancies created by the exit of incumbents, one of whom sadly died in office.

The statement reads, “The Kaduna State Government has announced the appointments of five new Permanent Secretaries to fill vacancies created by the exit of incumbents, one of whom sadly died in service.

“Permanent Secretaries serve in the 14 ministries, the Governor’s Office, the statutory commissions, and other agencies.

“Following the new appointments, Permanent Secretaries are now deployed into as follows:

“Bashir Lere for the Ministry of Public Works and Infrastructure, Nuhu Buzun for the Cabinet and Political Affairs (Office of the Secretary to the State Government), Muhammed Umar for the General Service (Office of the SSG), Aisha Mohammed for the Civil Service Commission;

“Murtala Dabo for the Public Service Office (Office of the Head of Service), Amina Sulaiman for Establishment, Balarabe Wakili for the Teachers Service Board, and Ya’u Tanko for the Local Government Service Board. 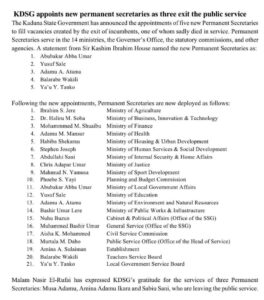