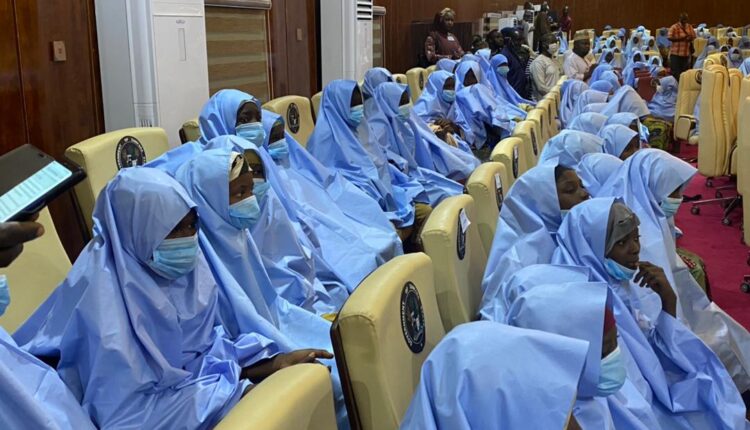 The Zamfara State Governor, Bello Matawalle, has disclosed that no fewer than 279 abducted schoolgirls from Government Girls Secondary School, in Jangebe, have regained freedom from their abductors.

He disclosed that the girls were released after exploring several options, particularly help from repentant bandits that led to the schoolgirls’ freedom without any ransom attached to their safe return.

He added that the abducted schoolgirls were received by him at about 5 am on Tuesday in Gusau, and that plans are being concluded to ensure the students undergo thorough medical check-ups to ascertain their health condition before they would be reunited with their families and loved ones.

He, however, appealed to parents and guardians across the state not to be weighed down by the incidents such that may lead them into removing their children and wards from schools.

According to him, the students’ safe release is the result of our peace effort and putting to shame all those saying there is no security in this country.

“We have been in discussion since Friday with the abductors and reached an agreement on Monday by 4pm that the girls were released.

“We are happy that all 279 have safely returned, they will undergo medical checks and given balanced diets to recuperate by the state government before they are handed back to their respective families.

“I want to appeal to parents not to remove their children from school as a result of this, we will ensure additional security in all the schools. We thank all media outlets for their support throughout these trying times,” the governor said.

Reacting to the development, President Muhammadu Buhari expressed satisfaction that the schoolgirls’ ordeal came to a happy end without recording any negative incident.

According to him, being held in captivity is an agonizing experience not only for the victims but also their families and all of us.

Buhari, however, called for greater vigilance by the people so that human intelligence could be collected early enough to nip the bandits’ plans in the bud, adding that the time has come to reverse, completely, the grim and heartbreaking incidents of kidnapping.

“Ransom payments will continue to prosper kidnapping,” he warned while urging the Police and the Military to go after the kidnappers and bring them to justice.

It would be recalled that confusion trailed the purported release of schoolgirls during the weekend barely two days after gunmen picked the students from their dormitories.

The confusion was that while the governor disclosed that the schoolgirls were still in captivity, an aide to the Vice President, Philip Obin, and some Zamfara state officials took to their social media page to announce the release of the hostages.

These puzzles over the schoolgirls’ release came on Sunday, barely 24 hours after seven abductees were reported to have escaped from their abductors and the commissioner of Police, Abutu Yar, confirming that at least 300 students were taken away by bandits from the school, saying, a joint search and rescue operations were already underway with a view to rescuing students.

Matawalle, while addressing a delegation from President Muhammadu Buhari, at the State House in Lafia, stressed that the schoolgirls were yet to regain freedom from their abductors.

The governor’s emphasis before the delegation led by Minister of Aviation, Hadi Sirika, further added mystery to the fate of the Zamfara schoolgirls following earlier reports of their release.

“We are using the leaders of the repentant bandits to rescue the schoolgirls from the kidnappers. Very soon we are going to witness the release of the abductees”, the governor said.

He said his administration “is going to continue with the peace process with bandits considering its impacts in addressing security challenges facing the state”.

But earlier, reports had claimed that the kidnapped girls were released and were in the palace of the Emir of Anka while awaiting transportation to the state capital, Gusau.

The swift change in claim further put the fate of the abductees in mystery with many not sure if they were about to be released but the bandits had a change of thought or there was never a release of the schoolgirls by the gunmen.