JUST IN: Youths, others occupy major roads ahead Buhari’s son wedding in Kano 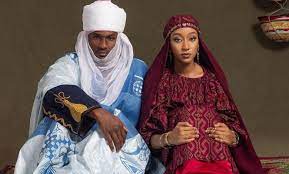 Hundreds of Youths, artisans, traders, and others have occupied major roads leading to Bichi in Kano State ahead of President Muhammadu Buhari’s son, Yusuf, and Zahra, daughter to the Emir of Bichi, Nasir Ado-Bayero.

Aside from those that have occupied both sidewalks leading to the wedding venues, scores of entertainers were already stationed at different locations, displaying their skills to hundreds of people waiting to catch a glimpse of dignitaries that would be attending the event.

The chairperson of the organising committee for the wedding and coronation, Shehu Ahmed, told newsmen that the president was expected to attend the wedding on Friday since he was unavailable for the engagement ceremony.

According to the committee, the wedding Fatiha would hold around 1:30 p.m. at Bichi Central Mosque after the congregational Juma’at prayer on Friday while the emir would be presented with a staff of office by the Governor of Kano State, Abdullahi Ganduje, on Saturday.

Confirming the President’s visit, his Senior Special Assistant on Media and Publicity, Garba Shehu, through a statement made available to newsmen, disclosed that a high-level delegation led by his Chief of Staff, Prof. Ibrahim Gambari.

According to him, the Presidential delegation, including the Ministers of Defence, Maj Gen Bashir Salihi Magashi (retd), Agriculture, Alhaji Sabo Nanono, Aviation, Hadi Sirika, and Water Resources, Suleiman Adamu will stay back after the wedding, to represent the President at the coronation of the Emir at Bichi the following day, Saturday.