JUST IN: Three governorship aspirants step down during… 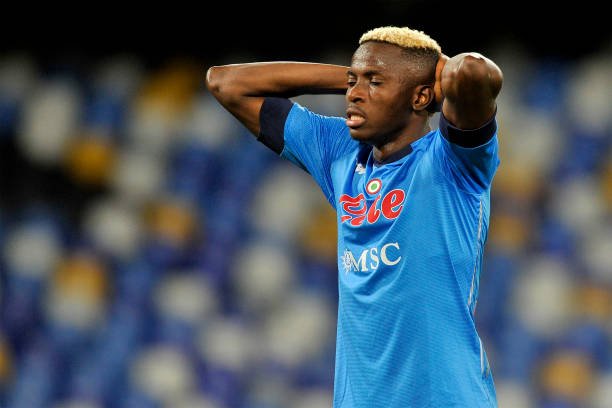 Barely 10 days to the kick-off of the biennial African Cup Of Nations (AFCON) tournament, the management of Italian football club, Napoli, has announced that their Nigerian striker, Victor Osimhen, has tested positive for COVID before leaving Nigeria for his base in the country.

It said that the Super Eagles forward was asymptomatic and has begun a period of self-isolation to prevent the further spread of the virus.

The announcement was made on Thursday through a statement released by the club’s management on its official website to inform their fans of the new development.

Osimhen had been included in the Nigeria squad list for the Africa Cup of Nations but was expected to return to Naples to assess his cheekbone injury on Friday, December 31.

Osimhen had been ruled out for three months, but had he received the green light from doctors, he could have played in the Africa Cup of Nations wearing a protective mask.

However, the swab test he underwent in Nigeria before boarding today came back positive, so the player didn’t leave his native country.

The Partenopei wrote on their English Twitter account that doctor Gianpaolo Tartaro, the professor who had performed the surgery last month, would check the player tomorrow.

Nevertheless, they provided a different explanation on their Italian account, saying that the medical check has been postponed and that ‘local’ (Nigerian) authorities have issued an isolation order for the 23-year-old.

The club statement reads: “SSC Napoli Spa announces that the player Victor James Osimhen tested positive, asymptomatic, at Covid-19 during the execution of the swab before the trip to Italy, where a check-up by Prof. Tartaro was scheduled for tomorrow.

“Consequently, the local authorities have ordered the isolation of the player and the check-up will be rescheduled after the negativization and his return to the community”, the statement added.

It would be recalled that Osimhen had already tested positive for COVID one year ago, when he returned to Nigeria to celebrate his birthday.