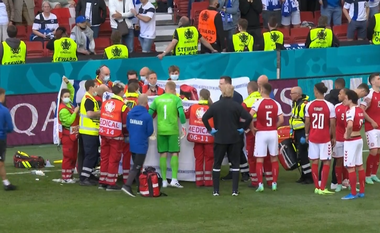 The Union of European Football Associations (UEFA) has suspended the Euro 2020 match between Denmark and Finland indefinitely after Denmark forward, Christian Eriksen, collapsed mid-way into the encounter.

Eriksen, without any players around him, dropped to the ground during the Group B match and required extensive on-pitch treatment for him to be resuscitated and wheeled out of the pitch into a waiting ambulance that rushed him to hospital.

Realising what could have happened, the referee, Anthony Taylor, immediately blew his whistle and brought proceedings to a halt, with both team officials immediately calling for the medical staff, who raced onto the pitch to administer treatment.

His Danish teammates formed a shield around him as the medics provided treatment before white sheets were held up around him to provide privacy. 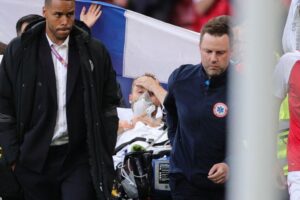 After the intervention of medical experts, the Inter midfielder has been stabilised in hospital after collapsing during his country’s opening Euro 2020 game against Finland in Copenhagen, the Danish capital.

Following medical experts report, Eriksen was taken to the hospital, UEFA sent out word that he’d been stabilised. The Danish FA also confirmed that Eriksen was awake and undergoing further tests.

Announcing the suspension of the match, UEFA disclosed that the decision was taken to protect the players who could have suffered emotional trauma after watching their teammates collapse.

UEFA said: “Following the medical emergency involving Denmark’s player Christian Eriksen, a crisis meeting has taken place with both teams and match officials and further information will be communicated later”.

The 29-year-old came up through Ajax’s famed academy before going on to become a star for the Dutch giants. Eriksen’s exploits in the Netherlands earned him a move to Tottenham in 2013, where he would go on to become one of the north London club’s top players.

After six and a half seasons with Spurs, Eriksen moved to Inter in January 2020. Eriksen took some time before becoming a key figure in Milan, but was a major part of Antonio Conte’s 2020-21 Serie A title-winners.