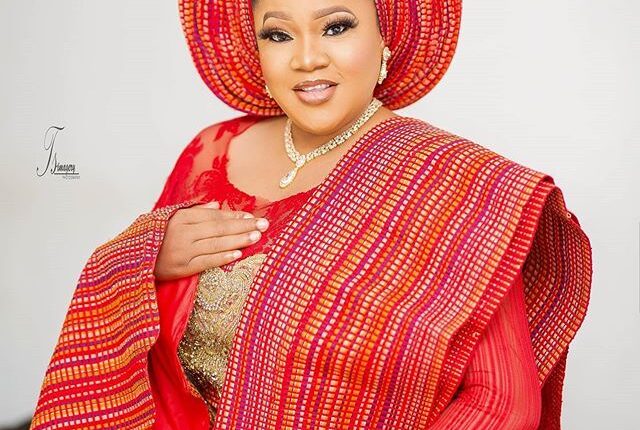 Popular Nollywood actress and filmmaker, Toyin Abraham, has cautioned colleagues and other celebrities to desist from dragging their children and family members into differences that arise between them, rather they should address it amicably.

Abraham, meanwhile, distanced self from online messages and videos with contents that cyberbullied children made by colleagues and other celebrities in her defence, saying I appreciate the love and passion towards me but that is no justification to maim other brands.

As gathered, the contents of the videos and messages were said to have been made in her defence following the frosty relationship between the actress and fellow celebrity, Lizzy Anjorin that had dragged for over three years after news filtered in, alleging that Anjorin was held by law enforcement agency during a trip to Saudi Arabia with the actress allegedly linking release of her ordeal to Toyin Abraham.

Speaking through a statement released on Friday on her social media handle, Abraham, who had been busy at different locations putting finishing touches to her upcoming movie, ‘the ghost and tout’, stressed that she had not sent anyone to engage in cyberbully on her behalf.

She noted that the content of messages and videos viewed on different social media platforms in her defence were clearly not sponsored by her nor that she directed the authors to publish them on social media on her behalf.

The actress, know for their distinctive interpretation of roles in movies, emphasised that after going through the contents, she discovered that some people could have been fueling the crisis basically for their personal gains.

“It is important I say this at this point though I have said it before and hopefully, this is the last time I want to say this.
I cannot and will not be held responsible for anyone claiming to be fighting for me while ‘abusing, cursing or calling out’ perceived enemies or colleagues.

“I saw certain videos on social media of people who purportedly are fighting for me and cursing others and dragging innocent kids into needless drama. Please I am not in anyway in support of this. Not once have I ever sent anyone on this type of errand.

“Please keep kids out of drama. These kids will grow up and as they say, the internet never forget. I appreciate the love and passion towards me but that is no justification to maim other brands.

“Lastly, I strongly suspect that some people are benefiting from this back and forth, (cos, what I watched this evening, video of people cursing colleagues’/ people’s kids is unnecessary and evil) hence the continuous fueling of this tiring drama.

“If you are a victim of cyber-bullying by anyone, kindly pursue it to a logical legal conclusion and make the bully pay. That is what I intend to do from now on and this is the last time I will be issuing this kind of statement. I just want to focus on the release of my next film, #theghostandthetouttoo @theghostandtout. Thank you very much”, she added.