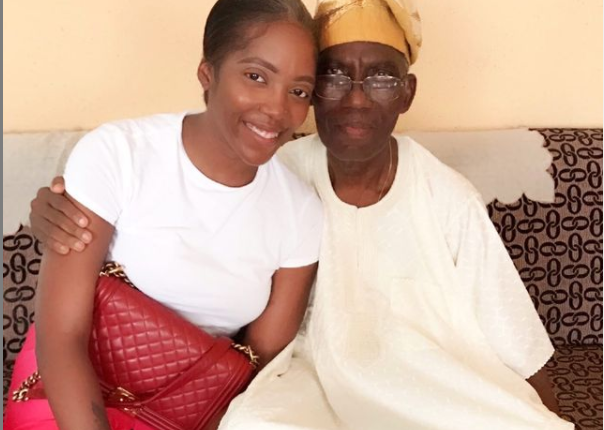 The father of Nigerian hip-hop singer, Tiwatope Savage popularly called Tiwa Savage, has passed on after a brief illness, barely five months after the artiste celebrated her 41st birthday in a grande-style.

Tiwa Savage, who described the father’s death as a rude shock considering the impact he had on her upbringing, is currently in a gloomy mood after medical officials certified that the elder Savage had transited.

Announcing the death of her father on Monday, the sonorous singer, through a short statement on her official social media handle, expressed sadness, just as she stressed that the death has left her weak.

The artiste hinted that the elder Savage, who she described as a king, had been battling with some ailments and that he fought greatly to overcome it but later surrender and passed on.

Although, the multiple award winner did not mention the name of her father but addressed the deceased with his different nicknames that many who knew the late Savage could relate with, saying Savy t’eko and pappin K”.

She said: “Early hours of this morning you made a peaceful transition. You fought till the very end, you really fought daddy, it’s been rough for you these past couple of years but you are resting now. This is tough on me, I’m so numb, so weak. Rest In Perfect Peace my King. I love you daddy. Savy t’eko, pappin K”.