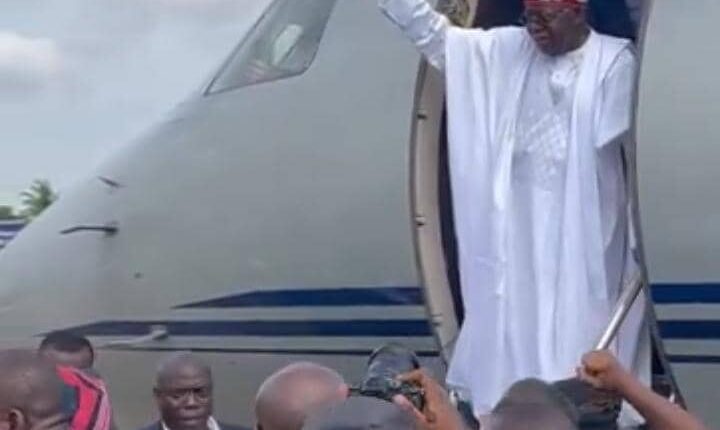 Tinubu, who wore a white Agbada with a red cap bearing his symbol, was accompanied back to the state by the Governor, Babajide Sanwo-Olu, and his Kano counterpart, Dr. Abdullahi Ganduje, Borno’s former governor, Kassim Shetima, and others.

The APC national leader returned to Lagos on Sunday after his aircraft landed at the Murtala Muhammed Airport, Ikeja, at about 4 pm into the hands of dozens of Lagos APC members and supporters who were waiting for him.

Among those that were at the Presidential Wing of the airport was the Deputy Governor, Dr. Obafemi Hamzat, the lawmaker representing Lagos-East senatorial district, Tokunbo Abiru, among others

The former Deputy governor and Senatorial candidate for the Lagos-West senatorial district, Dr. Idiat Adebule, the chairman Senate Committee on Finance, Solomon Olamilekan, as well as members of the Governor Advisory Council (GAC), and many others were also on the ground to welcome him back to the state.

Also, present to receive him was his daughter and Iyaloja-General for the state, Folashade Tinubu-Ojo, who came with dozens of market men and women to the port.

The Lagos state former governor, as gathered, left Ibadan, the Oyo State capital, for Lagos where he and many other APC chieftains attended the coronation ceremony where Ganduje was handed a chieftaincy title by the Olubadan of Ibadanland, Oba Lekan Balogun.

He is arriving in Lagos for the first time after the party’s primary which was held in Abuja, the Federal Capital between June 8 and 9, 2022, where he emerged as the presidential candidate for the 2023 General Elections.