How To Treat Persons with Disabilities – Duro… 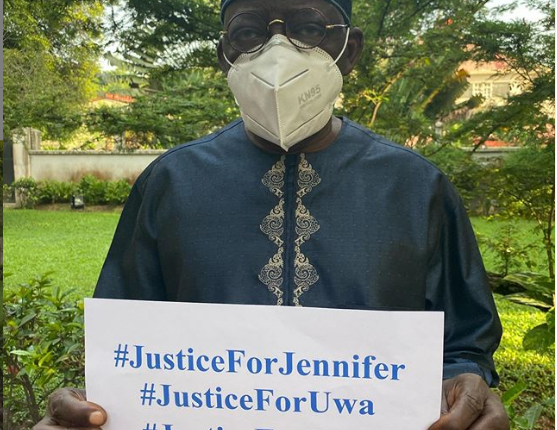 The All Progressives Congress (APC), National Leader, Asiwaju Bola Tinubu, has joined the call seeking justice for Tina, a teenager allegedly killed by a police officer, and another 100-level student of the University of Benin (UNIBEN), Uwaila Omosuwa, murdered while studying and other rape victims in the country.

Tinubu, who posed for a picture flagging a banner to join the campaign seeking justice for victims of police killings and rape cases in the country, said that his action was to support women in seeking an immediate justice for the victims in Nigeria.

The APC national leader, in a statement on Tuesday, stated that the injustice done to women does not compensate for the sacrifice they made daily for everyone in the country.

While condemning the actions against young women in the country, Tinubu stated that everyone irrespective of their status must join the call to end the violence and hatred against women in Nigeria.

“For far too long women and young girls in our nation have suffered the pain, hurt and stigma of gender-based violence and abuse. Too many have been hurt, intimidated, and bullied. Too many have died. Such violence is inexcusable.

“There is nothing that can defend this wrongdoing. All of us are born of women and nurtured by women. Vera Uwaila Omozuwa is the most recent name on a list, far too long, of women who have lost their lives at the hands of these vile criminals. Today, I rise in solidarity with women in Nigeria to say #enoughisenough.

“Let us all join together to bring swift #JusticeforUwa and #JusticeforJennifer as a way of beginning the process of bringing #JUSTICE for all victims of gender-based violence. We must bring an end to violence and hatred to the women of this nation so that they may live and thrive in peace, liberty, and hope”, Tinubu added.