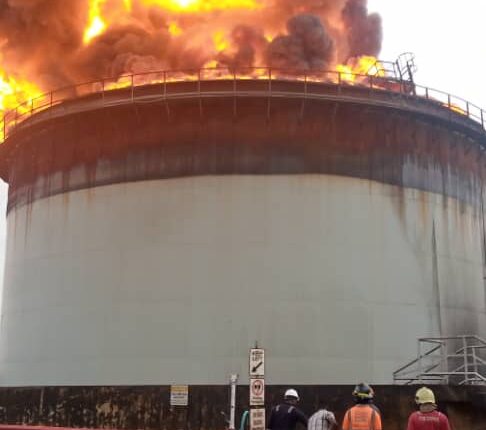 Pandemonium was reported to have broken out in Apapa Local Government of Lagos State after a tank farm said to be owned by a Nigerian multinational energy company, Oando, exploded and went up in flames.

The tank farm sited in Tego barracks in Marine Beach axis of Apapa was said to have exploded at about 1:30 pm on Thursday, leaving residents to panic over the possibility of fire that emanated after the explosion spreading to adjourning property within the community. 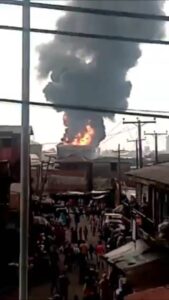 Adeseye added that immediately after the incident was reported at 1235hrs, the Lagos State Fire and Rescue Service Command and Control Headquarters, deployed both its men and equipment to the scene of the fire outbreak.

She urged Lagosians to remain calm and go about with their lawful businesses as efforts are already being intensified by men of the Fire and Rescue Service and other emergency responders to put the raging Fire under control.

The Fire Service boss said: “Firefighting operations is ongoing with all emergency responders on ground collaborating efficiently and effectively”.