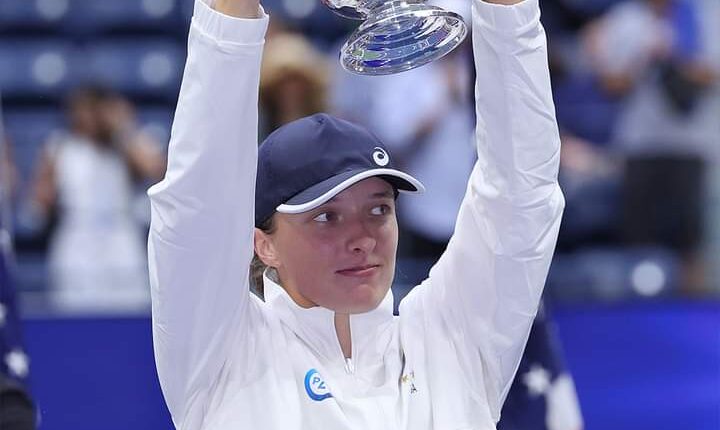 Share
The World number one female tennis player, Iga Swiatek, has capped a dominant 2022 season for herself by beating Tunisian fifth seed, Ons Jabeur, to lift her first US Open and second major title of the year.
Swiatek won the match 6-2 7-6 (7-5) to secure the season’s final Grand Slam trophy on the New York hard courts, ending the aspiration of Africans waiting to see a player from the continent lift one of the four major trophy.
After a one-sided first set, 28-year-old Jabeur settled midway through the second but it was not enough to stop the 21-year-old Polish player from clinching a third major title.
Swiatek, whose previous two wins both came on the clay at the French Open, ensured that Jabeur, who also lost in the Wimbledon final in July, continue to wait for one of the sport’s four most prestigious titles continues.
The Flushing Meadows final was a meeting between the two leading players on the WTA Tour this year, but Swiatek demonstrated why there is such a big gap between her and the rest with a largely dominant performance.
Swiatek remains the world number one, and would have done even if she had lost, with Jabeur moving up to a joint career-high ranking of second after reaching the final.
Swiatek came to dominate after the retirement of Australian world number one, Ashleigh Barty, in March, Swiatek has seized her opportunity to take over as the tour’s dominant player.
Earlier this year, she put together a 37-match winning streak which enabled her to claim six titles in a row – including the French Open at Roland Garros.
After going through an understandable dip which resulted in the streak ending in the Wimbledon fourth round, Swiatek has slowly reasserted her authority in New York.
Swiatek had won her nine previous finals without dropping a set – also including her maiden major win at the 2020 French Open – and set the platform for another victory with a confident start.
But she also needed to show resilience at times in the second set and that was after she was unable to convert either of two break points for a 4-0 lead, Swiatek suddenly found herself level at 4-4 and needed to save three break points to prevent Jabeur going 5-4 ahead.
Scoreboard pressure started to tell on Jabeur in the 12th game, with the Tunisian falling 30-0 behind and handing over a first match point with a loose forehand.
But Swiatek regained composure in the tie-break and sealed victory on her second match point when Jabeur hit a forehand long.
The pair shared a warm embrace in the middle of the court before Swiatek, who is the first woman since Serena Williams in 2014 to win seven titles in a season, celebrated in front of her team.
By contrast, Jabeur looked emotional as she sat with her head in her hands as she processed a second straight defeat in a Grand Slam final.