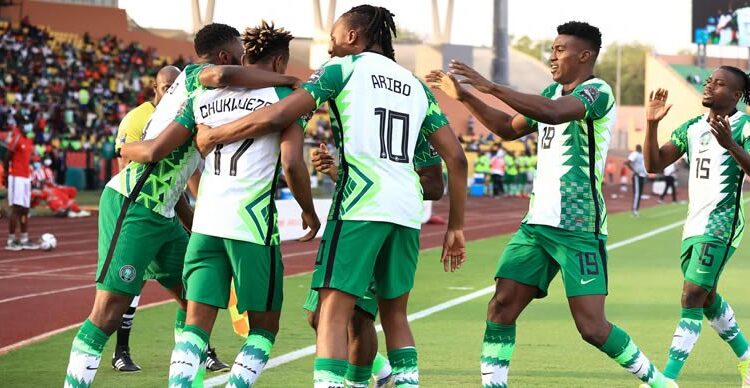 The Nigerian national football team, Super Eagles, has progressed to the knockout stages at the ongoing African Cup of Nations (AFCON) in Cameroon after defeating the Falcons of Sudan 3-1 to end their second game of the tournament.

Super Eagles win against their North African opponent puts the team on the summit of their group after the team won its first game against Pharaoh of Egypt by a lone goal.

The Super Eagles opened their goal account during the match played on Saturday through Villareal of Spain forward, Samuel Chukwueze, after which Union Berlin of Germany striker, Taiwo Awoniyi, and  Moses Simon completed the scorers chat for Nigeria.

Chukwueze struck after just three minutes of the clash at the Stade Roumde Adjia in Garoua to set Nigeria, who beat Egypt in a heavyweight opening fixture, on their way to a second straight win in Group D.

Taiwo Awoniyi added a second in slightly fortunate circumstances on the stroke of half-time before Moses Simon struck straight after the interval, to take the game beyond their opponent.

But as the game progressed, the Sudanese were handed a penalty after Video Assistant Referee (VAR) ruled that Nigerian defender, Ola Aina, fouled an opponent.

Walieldin Khedr Safour Daiyeen notched Sudan’s maiden goal of the tournament and his first at the international level – from the penalty spot with 20 minutes in the game.

Nigeria and Sudan are meeting for the third time at the Africa Cup of Nations, but it’s their first encounter at the tournament for 46 years.