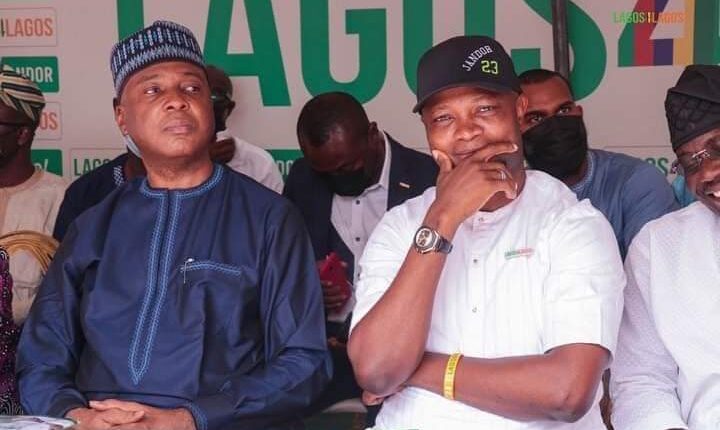 Ahead of the 2023 general election, the Senate former president, Bukola Saraki, and the leadership of the Lagos4Lagos movement have formed an alliance to push out the ruling All Progressives Congress (APC) from the state.

Also included in the alliance was that members of the movement would officially dump the APC and embrace the Peoples Democratic Party (PDP) flag on December 18th, 2021.

The alliance was formed on Saturday during Saraki’s visit to the headquarters of the movement in Adeniyi Jones axis, where he was welcomed by dozens of members of the factional APC.

Saraki, a Kwara State former governor, was received by the lead visioner of the Lagos4Lagos group, Olajide Adediran, popularly called Jandor, and other members of the group at about 12.30 pm.

After several minutes of deliberation, members of the Lagos4Lagos movement voted unanimously that they join the PDP, in order to actualise their dream of taking over the mantle of leadership in the state.
They also agreed that the switch from APC to PDP should be officially conducted in another fortnight at the Tafawa Balewa Square (TBS), Marina axis.
As gathered, the official decamping would occur eight days after PDP would have sworn in their National Working Committee (NWC) led by a senate former president, Iyorchia Ayu, and it would be one of the first major assignments to be undertaken by the chairman.

It would be recalled that the movement had in October held a parallel state congress at the Airport hotel in Ikeja, but was not recognised by the party’s national leadership.

At the congress, Sunday Ajayi, from Agege Local Government was elected as chairman of the APC faction that had consistently complained about imposition and non-inclusion of true sons of Lagos in APC activities.

The group had vowed to challenge the system and offer new alternatives ahead of the 2023 general elections as well as win the gubernatorial poll in the state.

Reacting to his election as the state chairman, Ajayi said impunity has ended with the conclusion of the state congress.