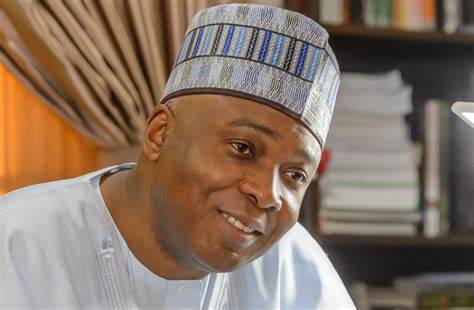 The former president of the Senate, Bukola Saraki, has disclosed that some state governors and predecessors on the platform of the All Progressives Congress (APC) were currently concluding plans to defect to the Peoples Democratic Party (PDP), ahead of the 2023 general election across the country.

Saraki added that the gale of defection that was about to hit the ruling party would commence this week when a former governor would be officially dumping the PDP, basically to support the opposition party to take back power during the next election.

He hinted that some of the reasons highlighted by these incumbent and former governors were that the country cannot be allowed to fail going forward in 2023, saying everyone now understand that we have to get it right beginning with the general election.

Saraki, who was Kwara State’s former governor, made the announcement on Tuesday during an interview on a popular television news programme in the country.

The Kwara former governor noted that every Nigerian now understands that the country’s major challenge was leadership and that there is a need to address it, noting that this formed reasons for the planned defection.

“We have the potentials to turn the country around and that is why I believe with the right leadership, things can change in the country. I often say that no one can give whatever he does not have. In 2023, we have to get it right, and to do that, we needed the right kind of leadership.

“There were certain governors that we already know that they will leave. And we were not surprised that they defected to the APC. Since then, we have had some big wigs that joined us. Also in this week, there is a governor or former governor that is going to join our party, PDP.

Aside from that, we know that some of the leaders in the ruling party will not defect early, rather they do it late. And you saw that during the 2015 election. So, keep watching, And Nigerians will not be surprised when they begin to see some defections from the ruling party to the PDP”, he added.

The former Senate President, meanwhile, said the division being witnessed in Nigeria would help the PDP return to power in 2023, noting that Nigeria has never been this polarized as currently been witnessed under President Muhammadu Buhari’s led administration.

According to Saraki: “We have what it takes but beyond having what it takes; we should ask ourselves what would make our work much easier and where the country is today.

“There is no doubt that as a country, we are not as united as we used to be. Since the civil war, Nigeria has never been this disunited. We have high unemployment, security issues, among others. And these are backed by statistics. I’m not just speaking as an opposition leader.

“The country is in a different place, and Nigerians have seen what the ruling party has done to them. We are the only alternative available for Nigerians to have good governance. We must convince Nigerians that we are ready to take charge and wrestle power.”