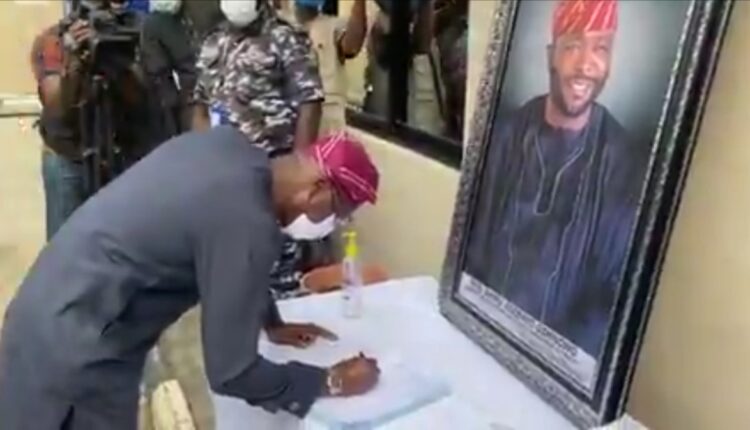 The Lagos State Governor, Babajide Sanwo-Olu, on Friday paid a condolence visit to family of late senator Adebayo Osinowo representing Lagos East Senatorial District that passed on at age of 64 after a brief illness.

Sanwo-Olu, who was accompanied on the visit by his deputy, Dr. Obafemi Hamzat, described Osinowo as a loyal politician that upheld the progressives ideology until his death.

Osinowo was the former chairman, senate committee on industry, and had since been buried according to Islamic rites at his hometown in Ijebu, Ogun state.

Addressing newsmen after leading members of his cabinet members to pay a condolence visit to the family in Lagos, the governor stated that Osinowo’s status in the country before his death was responsible for the number of political leaders and other visitors that have come to commiserate with the family.

Sanwo-Olu, while describing the late lawmaker as a detribalized Nigerian, stated that the ex-senator during his lifetime did not favour any tribe above the order in his constituency, rather, engage everyone to ensure dividend of democracy spreads.

“He is a strong and very big bridge builder and does not engage in tribalism. Looking back on all he did with us, one cannot but thank almighty Allah for his life, though it is very unexpected but we will continue to give thanks and glory that he has been able to put his hands in the sand of time.