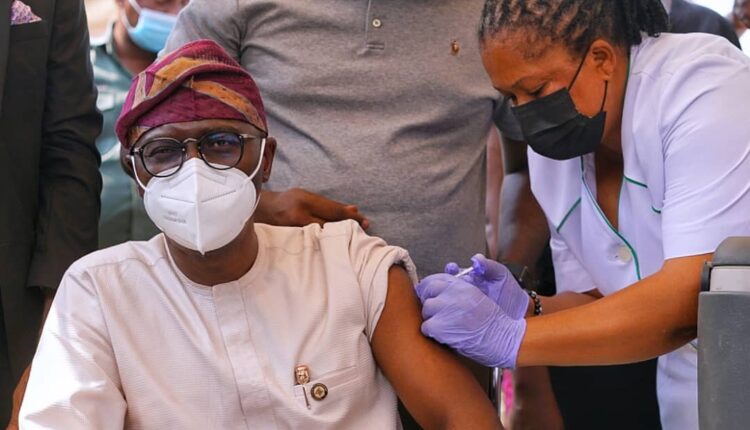 The Lagos State Governor, Babajide Sanwo-Olu, and the Deputy Governor, Dr. Obafemi Hamzat, and some of the commissioners have received a jab of the Astra Zeneca COVID-19 COVAX vaccines aimed at assisting the state to flatten the virus curve across the state.

Also receiving the vaccines, after the governor and other senior government officials, were frontline health workers treating residents that have contracted COVID-19 virus across the state.

Sanwo-Olu, Hamzat, and other recipients got a shot of the vaccine on Friday at the Infectious Disease Hospital (IDH), Yaba, and was witnessed by World Health Organisation (WHO), and other international health organisations representatives.

The roll-out came barely three days after the first consignment of 507,000 Astra Zeneca COVID-19 COVAX vaccines provided by the Federal Government were received by the state government and were transferred to state cold chain facilities for safe storage and inventory management.

After receiving the vaccine, Sanwo-Olu, while addressing the newsmen, debunked claims that the vaccine had side-effect and was not safe, stressing that the vaccine was brought in to prevent the virus from having an adverse effect on the state.

The governor, who was the second person to receive the vaccine, added that he did not feel any pains, just as he commended health workers for their efforts to keep the state safe from the virus.

While corroborating W.H.O, he said that there was no reason for anyone to panic over the desirability of the inoculant, while urging frontline workers enrolled in priority list to take shots of the vaccine within the stipulated period.

He said: “I have just received a shot of AstraZeneca vaccine and I don’t feel awkward. This falls in line with what the W.H.O has been saying about the safety of the vaccine. I commend all our numerous health workers for their sacrifice. The IDH is still the epicentre of our COVID-19 response; that is why I came here for the vaccination.

Sanwo-Olu urged the public to refrain from churning out unsubstantiated information about the vaccine, asking residents to allow the science lead the nation out of the pandemic.

The Governor said he was optimistic that the nation would be out of this pandemic if the vaccine rollout programme went as planned.

Also, the Deputy Governor said: “I have received my shot of the vaccine, the nurse that attended to me is very professional and as you can see, I am OK. The world has vaccinated about 346 million people and I am now one of those, the essence is to prevent illness and death, so I encourage everyone to get the vaccine”