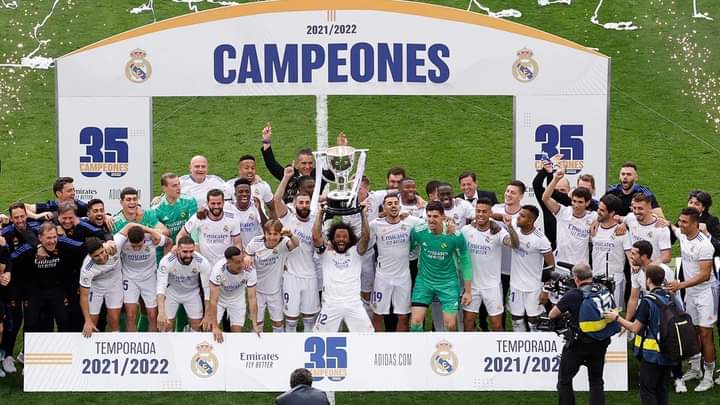 The Spanish football giant, Real Madrid, has won its 35th La Liga title with four games to spare in the 2021-2022 season for the first time after 32 years, following their 4-0 victory against Espanyol.

It won the league with only two losses with their most recent being a 1-0 against Rayo Vallecano and the manager, Carlo Ancelotti became the first manager to win domestic titles in Europe’s five major leagues, including France, Germany, Spain, Italy, and England.

The Madrid team, after suffering a defeat to Manchester City during their first-leg Champions League semi-final game away, alerted their opponent of what awaits them during the return fixture at home, displaying skills that earned them accolades since the start of the season.

And the league winner got a reward for their style of game in 33rd minute with Brazilian forward, Rodrygo, putting smiles on faces of fans that had gathered at the Santiago Bernabeu stadium, with his goal. 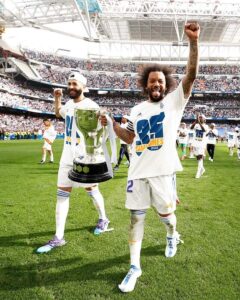 And 10 minutes after, the forward doubled the lead, in other put pressure on their opponent and preventing any chances of leaving the stadium with any point.

The thrashing was completed by Marco Asensio and Karim Benzema, adding the gloss to ensure they wrapped things up with four games to spare.

Needing only a draw to guarantee glory once more, it took 33 minutes for Rodrygo to open the scoring. The Brazilian added a second 10 minutes later with a fine finish in a dominant display at the Bernabéu.

Madrid has moved 17 points clear of second-placed Sevilla, whose title push effectively ended with a 1-1 draw against Cadiz on Friday, and celebrations are now underway in the Spanish capital.