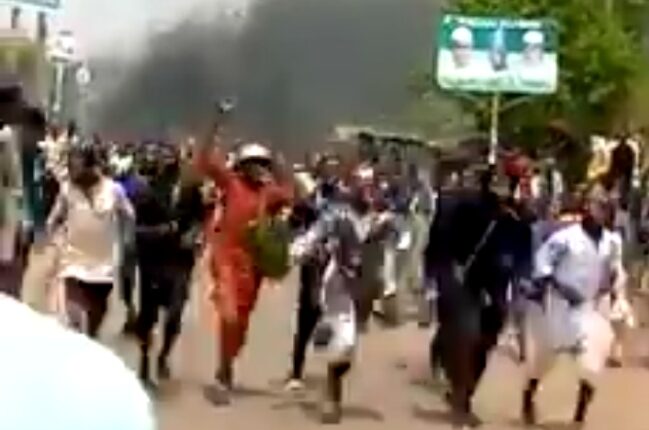 Commercial and other activities across Sokoto State have been paralysed by youths protesting against the continued detention of two young men linked to the killing of a female student of Shehu Shagari College of Education, Deborah Emmanuel, who was alleged to have uttered comments that were blasphemous against Islamic tenets.

The youths said that the two suspects arrested by Sokoto Police Command should be released and not prosecuted for beating and setting Deborah’s body ablaze at the school.

Aside from that, the demonstrators also demanded that the Sultan of Sokoto, Saad Abubakar, should immediately retract his statement that condemned the murder of the young lady.

The demonstrators against the continued detention of both suspects were said to have been encouraged to take over the streets after the Sokoto Chief Imam, Dr. Sheikh Mansour, demanded that the police release those arrested over Deborah’s murder immediately.

Aside from that, the cleric requested that the State Governor, Aminu Tambuwal, immediately reopen the Shehu Shagari College of Education where the incident happened and that there was no justification for such.

It was learnt that after listening to their various clerics including Mansour, the youths took to the streets, setting up bonfires across the metropolis, stressing that those under detention were not guilty and that the act was lawful.

As the demonstration intensified, the irate youths were said to have attacked a church as well as destroyed property in some shops, as a way to express their displeasure over the law enforcement agencies and the sultan’s stance on Deborah’s case.

Some of the youths were seen during the demonstration along Maiduguri road, armed with placards with different inscriptions while they were shouting “Allahu Akbar” translated in English as ‘God is great’.

It was gathered that the protest started at the roundabout of Zabira mall and they marched through Gao-nama onwards to fly over within the state metropolis.

Narrating how actions of the youth intensified, a Sokoto resident, Ibrahim Arkilla, described the demonstration as a riot carefully organised by young men and women who were in support of the treatment melted to the deceased student.

“The crowd which made bonfires on the streets were also demanding the police stop the manhunt for those identified to have taken part in the killing”, he added.

Another resident, Bube Ando, who resides a few meters away from the Sultan’s palace, stressed that on arrival of the protesters at the monarch’s premises, a large number of youths chanted severally, “Allahu Akbar”.

According to him, some of the security men deployed to protect the palace tried to ask the protesters to leave but they became unruly.

“Policemen and soldiers who stood outside the palace hurled tear gas canisters and fired into the air and succeeded in dispersing the crowd,” he said, without giving details about whether anyone was hurt.

It was gathered that the mob retreated downtown where they tried to loot shops belonging to Christian residents but were dispersed by security patrol teams, said another resident, Faruk Danhili.

Meanwhile, a combined team of security operatives including soldiers from the 8 Division, Police, DSS, and NSCDC were seen to have dispersed the demonstrators, to prevent further destruction in the state.