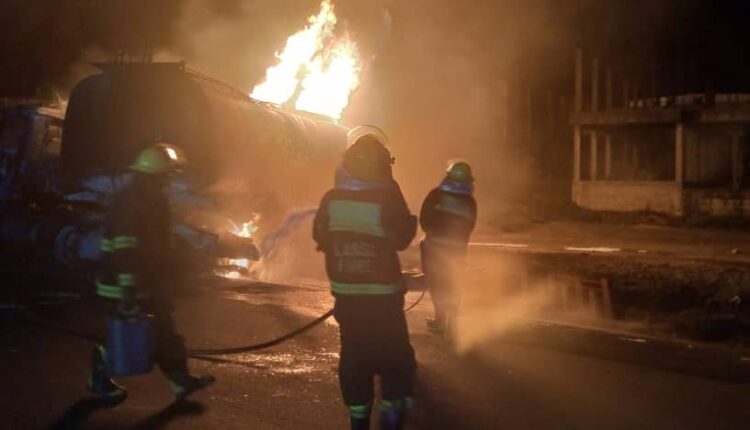 Property worth millions of naira were said to have been destroyed when about two tankers exploded on Otedola bridge in Lagos State.

gathered that the tanker explosion occurred at about 3 am on Saturday and that the fire from the explosion was already raging as well as spreading.

It was learnt that the explosion occurred after a truck conveying fabrics outward of Lagos experienced brake failure and collided with the tanker laden with Petrol Motor Spirit (PMS) on the bridge.

The fire that emanated from the explosion was said to have spread and gutted a stationary tanker with number plate KBG91XA which was said to be conveying PMS outward neighbouring states.

An eyewitness narrated that the Lagos state fire service officials were seen at the scene battling to put out the fire that emanated after the explosion which was said to have destroyed property.

He added that the prompt response of the state fire service officials saved the entire Omole phase 2 and Magodo estate from the explosion that was said to have left residents in panic.

Confirming the incident, the Director-General, Lagos State Emergency Management Agency (LASEMA), Dr. Femi Oke-Osanyintolu, said that no life was lost in the explosion.

“On arrival at the incident scene, it was discovered that a 40fit containerized Truck loaded with fabric had a brake failure while moving inward Berger. It then collided with a tanker loaded with 33000 liters of PMS. The impact of the collision resulted in the fire outbreak that destroyed property.