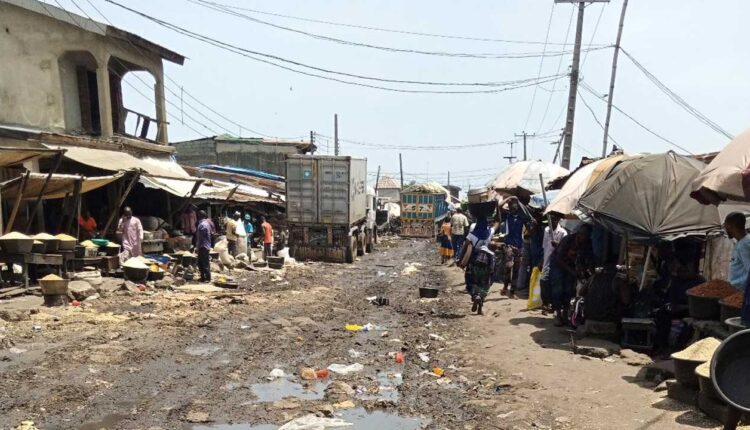 Atleast one person has been reported dead and scores of others sustained varying degrees of injuries when policemen attached to Lagos Command and traders in Alaba Rago market, Ojo Local Government Area clashed in the state.

It was learnt that the deceased was a mobile phone trader who was shot by the police during the face-off with his colleagues in the market.

As gathered, the clash started after policemen deployed to Okokomaiko Police Station stormed the market, during trading hours, to arrest a suspect on its watchlist, for onward prosecution.

It was learnt that as the law enforcement officers tried to effect the arrest on Tuesday, they did not see the suspect and in a bid force the suspect out from his hiding place, decided to impound dozens of mobile phones belonging to his fellow traders.

During this act, they met stiff resistance from traders who insisted that the product cannot be taken away and used as an exhibit for the crime they were unaware.

Our correspondent gathered that the resistance from the traders against the arrest further resulted in the clashes that occurred within the market.

The Babaloja of Alaba Rago market, Ali Malami, in a telephone chat with The Guild, confirmed the causality, narrating that the market leadership has initiated moves to get justice for the deceased trader.

Malami said: “The police came into the market and were searching for a trader they claimed sold mobile phones to a complainant. After they were informed that the suspects did not come to the market, the law enforcement officers decided to impound other traders’ goods.

“After the traders discovered this, they mobilised and resisted the moves, resulting in an altercation between the policemen and my members.

“When the law enforcement officers realised that my members were more than them, they began to shoot; the trader was hit and died immediately”, he added.

The spokesperson for the command, Benjamin Hundeyin, who confirmed the clashes, disclosed that the Commissioner of Police, Abiodun Alabi, has ordered investigations into the clashes.

Hundeyin, through a statement made released on his official social media handle, stressed that the investigations would be to unravel both immediate and remote causes of the incident.

According to the statement, Policemen of Okokomaiko Division today went into Alaba Rago Market to effect an arrest of a suspect but came under heavy attack from a large number of traders.

“In a bid to tactically retreat from the armed mob attack, one of the officers fired his weapon, resulting in fatal injury to one of the attackers. A detailed investigation has commenced into the immediate and remote causes of the incident”.

The clashes between the police and traders came months after the state governor, Babajide Sanwo-Olu, lifted the relocation order earlier imposed on the market.

Court may approve voting without PVC during 2023 election