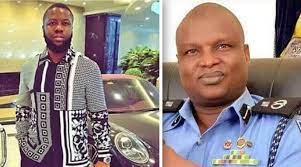 Following United States (US) Government warrant of arrest issued on a Deputy Commissioner of Police, Abba Kyari, the Inspector-General of Police (IGP), Alkali Baba, has set up a committee to investigative the allegations leveled against Kyari by the Federal Bureau of Investigation (FBI) officials investigating a Nigerian online celebrity, Ramon Abbas popularly called Hushpuppi and other co-conspirators in the $1.1 million Qatari school fraud case.

Baba said that the committee members would investigate to determine Kyari, a well-decorated law enforcement officer, status in the fraud case particularly to ascertain whether he was guilty of the allegations or not.

The IGP’s prompt decision to investigate the law enforcement officer came hours after the Peoples Democratic Party (PDP) raised concerns over the allegations and recommended that the Federal Government carry out a forensic investigation into the FBI report.

Aside from Hushpuppi and Kyari, the FBI also mentioned five other suspects including a Kenyan for allegedly defrauding a businessperson attempting to finance the construction of a school for children in Qatar.

Baba, in a statement released by the Force Public Relations Officer (FPRO), Frank Mba, at the police headquarters on Thursday, assured Nigerians that the outcome of the investigations would be made public by the law enforcement agency.

The statement reads: “Sequel to the receipt of allegations and indictment processes from the Federal Bureau of Investigation (FBI) against one of the personnel of the Nigeria Police Force, DCP Abba Kyari, the Inspector General of Police IGP Usman Alkali Baba has ordered an internal review of the allegations.

“The Nigeria Police Force reaffirms its commitment to the pursuit of justice and the strengthening of its professional relationship with the FBI and other international partners. Further developments on this case will be communicated to members of the public accordingly”.

The party, in a statement by its publicity secretary, Kola Olaogbondiyan, said: “It is indeed disquieting that the integrity of our nation has fallen so abysmally low under the corrupt and fraud-patronizing President Muhammadu Buhari-led All Progressives Congress (APC) administration, to the extent that the head of its police intelligence unit is being charged in connection with international fraud.

“Our party demands that the APC administration should not sweep this matter under the carpet given the manifest rapport between Kyari and some top APC leaders. We urge President Buhari not to “ease out” this case of corruption but should immediately restore the integrity and image of our nation by allowing for a forensic investigation of the suspect.

“Moreover, if this Abba Kyari matter is not well handled, it will be a permanent stain on the reputation of our police, security system, and our nation at large.

“The PDP, therefore,easks President Buhari to direct the Inspector General of Police to take in Abba Kyari for questioning and if found culpable, he should be handed over to the FBI”.