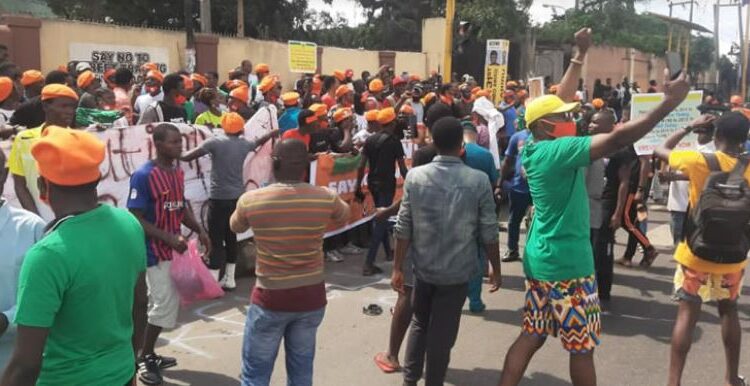 No fewer than 30 Revolution-Now protesters who stormed the streets to protest alleged bad governance and insecurities across the country have been arrested by security operatives in Lagos.

As gathered, the protesters marched from Ojota to Maryland chanting songs of solidarity in spite of warnings by the state’s commissioner of Police against unlawful protest and march in the state.

The hundreds of protesters who stormed the streets expressed their grievances against alleged bad governance, insecurity, kidnappings among others in the country.

It was gathered that journalists who came to cover the protest were attacked during the process by members of security operatives while some protesters were equally injured but the number of people in these categories were yet to be ascertained.

Confirming the arrest, the Public Relations Officer, Lagos Police Command, Muyiwa Adejobi, disclosed that not less than 30 protesters where arrested at various locations within the state over unlawful assembly and conduct.

Adejobi explained that such action is capable of breaching public peace and other offences which include violation of C0VID-19 protocols.

He said that those protesters wearing Revolution-Now creasted vests and placards would be charged to court on Friday, 2nd Octo er, 2020 for disregarding orders, as such would serve as a deterrent to those planning to stage unlawful gathering in the state.

Earlier, the Lagos State Police Command had directed its personnel to prevent residents, particularly groups and societies, from staging rallies or protests across the state on Thursday (tomorrow).

It explained that the move was in line with Governor Babajide Sanwo-Olu directive that residents should be prevented from flouting all safety measures introduced to curb person-to-person transmission of coronavirus in the state.

The Commissioner of Police, CP Hakeem Odumosu, stressed that the command would not allow any gatherings, rallies or protests against the sovereignty of Nigeria in the state and that any group arrested would be made to face the wrath of law.

“Similarly, parents and guardians are enjoined to warn their children and wards to desist from any rallies, protests, or be mobilized to wage war against the government of the Federal Republic of Nigeria as they (parents or guardians) of any youths arrested for such activities would be prosecuted.

“The general public are advised to be law-abiding, desist from violence and any act that is capable of disrupting the sovereignty of Nigeria,” the Commissioner was quoted as saying in a statement by the state’s Police Public Relations Officer, Olumuyiwa Adejobi.

Odumosu, however, advised the officers on the need to maintain law and order in the state and repel any forces that can disintegrate Nigeria, adding that officers and men of the command must act within the ambit of the law in every situation.