JUST IN: Passengers stranded after railway workers shutdown operations over poor salary, others 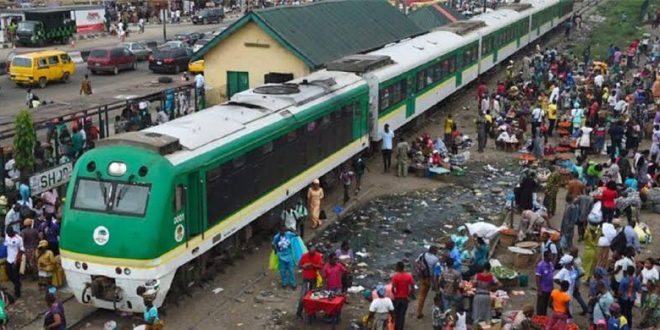 Millions of businessmen, civil servants, and others that rely on rail services to connect their destination were currently stranded after the over 11, 000 Nigerian Railway Corporation employees under the aegis of the Nigerian Union of Railway Workers shut down operations across the country over poor wages and welfare packages.

Many of the stranded passengers were said to have arrived at the stations with believes that the strike would have been averted by Federal Government through negotiation with the workers but they were shocked after none of the captains as well as other workers were seen on duty while the entire trains were packed on the coaches.

Some of the notable routes that were affected by the development include Lagos-Ibadan, Abuja-Kaduna, and Warri-Itakpe routes, which had become known for the movement of a large number of passengers.

Other notable routes affected by the three-day warning strike embarked upon by the workers on Thursday include Lagos-Kano, Kano-Unguru and Aba-Port Harcourt, and others.

The actions of the workers, it was learnt, would affect the over N20 million daily revenue made by the Federal Government through rail services which had been considered as the better option for passenger movement across the country.

Speaking to newsmen at the Idu railway station in Federal Capital Territory (FCT) Abuja, President of Senior Staff Association of NRC, Aliyu Mainasara, said that a total shutdown of operations would commence if the apex government failed to meet their demands after the three-day warning strike

Mainasara lamented that the working condition the central government had subjected the workers were very poor that they have turned beggars, saying we often assist passengers to pick luggage in order to get money to feed daily.

According to him, the salary is very poor that we earn N26, 000 minimum wage and there is no insurance package for workers risking their lives to transport passengers daily on the routes across the country.

He disclosed that rather than insure the lives of the workers alongside the new coaches bought by the apex government, the Minister of Transportation, Rotimi Amaechi, had an agreement with insurance companies on the facilities and excluded the staff.

“It is sad. The man directed by the government to pilot a train that worth over N7 billion and insured N50 million premium earn a wage that far-cry to the money paid on the facility handed over to him; we cannot continue this way.

“Aside from the wages, the condition of service currently in use at the railway corporation is outdated. This document was last reviewed 43 years ago, I  mean 1978, and we all know that things have changed across the country since then”, the president added.

He noted that these and other issues were responsible for the industrial action they embarked upon since the government understand strike better than negotiation.

Before the strike, Amaechi was said to have held a meeting in Lagos recently with the union, but the meeting ended in a deadlock and the workers vowed to embark on their earlier plans.

After the meeting, the NUR, an affiliated body to the Nigerian Labour Congress (NLC), President-General, Innocent Ajiji, stressed that all railway workers would down tool as from 12am today.

On whether the strike would affect all the rail stations in Nigeria, Ajiji said, “Yes. The Abuja-Kaduna, Lagos-Ibadan, Warri-Itakpe, Lagos-Kano, Kano-Unguru and Aba-Port Harcourt, all those trains will stop. And even our offices will be closed down.

“And apart from those who operate the movement of the trains, we have local workshop workers, tracks men, admin department, everywhere will be closed down!”

He added, “This strike will cause a drop in revenue for the sector. But that is not the issue. Rather the issue is that government should listen to our just demands.”

“We will be at the stations by 6am on Thursday and this is because in Abuja, for instance, the first train moves by 7am. So we must be there by 6am to stop the train from moving.”