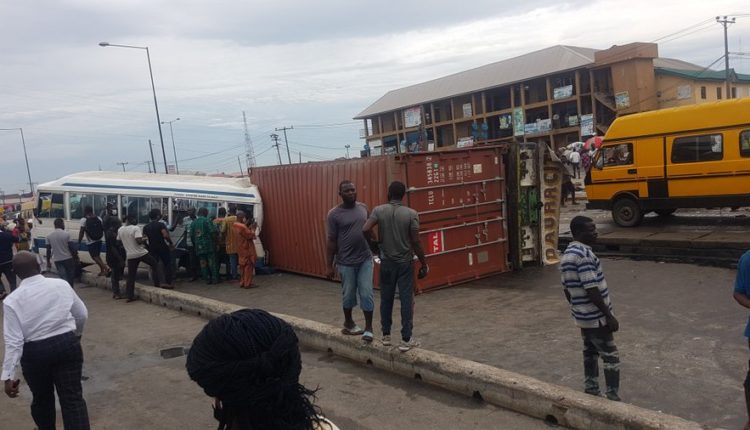 Share
By Monsuru Olowoopejo
Atleast one person has been reported to have died when a container-laden truck fell on a commercial bus at Doyin-Orile end of Lagos-Badagry Expressway, in Lagos State.
The casualty, The Guild gathered, was a petty trader at the bus stop who was said to be trapped and was yet to be recovered beneath the container by emergency officials in the state.
Aside from the woman, scores of passengers and residents were said to have sustained varying degrees of injuries when the container-laden truck fell on the commercial bus on Monday.
The Guild learned that at about 4:00 pm, the truck,  on approaching the bus stop at a high-speed, tried to apply its brake in order not to crush commercial buses, but it failed, crushed a bus and fell on another within the axis.
A resident, who identified herself as Labi, said: “the truck crushed a bus then fell on another with a woman selling orange trapped underneath the container itself”.
While blaming the driver for overspeeding, Labi urged motorists to avoid the route as there was heavy traffic resulting from the accident