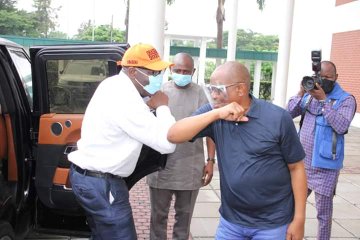 Barely 72 hours after Edo State embattled Governor, Godwin Obaseki, was disqualified by All Progressives Congress (APC) from the state gubernatorial race, a denial of his second term ticket, the governor has begun signaling his next line of action by identifying with Peoples Democratic Party (PDP).

Obaseki’s first move which indicates his intention to fight to the finish was his visit to River State Governor, Nyesom Wike, one of PDP ruling state governor.

The embattled governor’s visit to Wike on Sunday cannot be disassociated from his decision to pay back APC for the alleged wrongdoing against him.

Obaseki, however, before visiting Wike, hinted his exit from APC and thanked supporters that stood by him during the run to the screening.
In a statement on his official social media handle released before arriving Port Harcourt, Obaseki said: “I appreciate the sustained show of solidarity, support, and goodwill from Edo people and Nigerians in the face of injustice by the APC screening committee. I will be making my next move known after I complete consultations with my supporters”.

Although, hours after the said disqualification of Obaseki, there had been speculations that PDP members have been reaching out to the embattled governor as concerned Nigerians that felt he was not well treated by APC and have assured him of a warm welcome whenever he decides to embrace the party’s ideology.

There were rumours that a Nigerian former Vice President, Atiku Abubakar, also reach out to Obaseki, but the outcomes of their discussions were not assertive, even though, it was suspected that the governor will eventually decamp to PDP.

Sources within the Edo state government house told Guild that Obaseki supporters were ready to lay their lives down for the embattled governor and that they were only waiting for his directives on the next line of action.

They said that the supporters across all wards as well as lawmakers were ready to follow Obaseki wherever he chooses to go and ensure he returns as the governor of the state.

One of the sources, who is close to Obaseki, confided in The Guild that, there was a strong possibility that the governor will likely go to another party for him to seal the gubernatorial ticket since his disqualification was unreconciliable.

He explained that the fact that both the screen and appeal committee of the APC maintained grounds on Obaseki’s disqualification were enough reasons for the governor to understand that there was no going back and that his fate had been sealed.

Another source from the APC in Edo state stated that the matter had gone worse than it was expected and that the party is already divided over the disqualification of the governor.

He disclosed that the party was already divided and that there were various camps that had concluded plans to leave should the governor ready to leave APC so far the new party will honour him the gubernatorial ticket.

The source further explained that the governor’s decision at the end of the day would not be a matter of desperation but a case of one who was passionate to serve the people of Edo state and introduce policies and programmes that will bring more development to Edo.

When asked why Obaseki did not contest his disqualification by his own party, the source established that there was no point for the governor appealing a decision that was already been concluded and trying to do that will amount deception.
The governor was said to have thought it wise after consultations that it was of no point challenging the outcome of the committee findings.
Besides, the embattled governor’s Special Adviser on media, Crusoe Osagie, said that Obaseki’s statement was clear on the issue.
“The governor has issued a statement and urged his supporters to be patient and be calm and that they will hear from him in the coming days.
“He has not spoken yet but I can assure you that in the shortest time, we will get directions from him as it concerns the next step to take on the issue.
“A lot of people have sent their goodwill and expressed their thoughts on what played out at APC Secretariat on June 12 which was orchestrated by the party national chairman, Adams Oshiomhole.
“The governor has not announced any decision yet, I can assure you that once that decision comes, you guys will be the first to know.
“He has not spoken on the plan to leave the party or go to PDP yet not to even be turned down by the party.
“We will wait for him to make his decision known and from there we will know what to do.
“The governor’s statement on the screening committee report was quite clear and that he would not appeal their findings because of Oshiomhole preeminent in the system. He had said that he remains the Supreme Court and that was why the governor had felt that it will not be proper to appeal such decision”.

Meanwhile, National Publicity Secretary, PDP, Kola Ologbondiyan, told The Guild that the party would be willing to welcome Obaseki and his supporters into the PDP and that process must start from the embattled governor’s ward, to state chapter of the party before his reception at the national level.

He disclosed that PDP at national was aware of crisis rocking APC in Edo, the governor’s disqualification from racing in the party forthcoming gubernatorial primary elections and party politics presenting consuming the ruling party the state.

“We are yet to be briefed of any development but what we know is that our party, PDP, doors are open to welcome as many as possible Nigerians willing to join in serving the nation”.

Once our party in Edo reaches out to us, our job at the national level of PDP is to weigh options on the ground and align accordingly but whoever wants to join the party but start from the ward to the state before the national level.

“It process and procedure and the order must be from bottom to top not otherwise”.