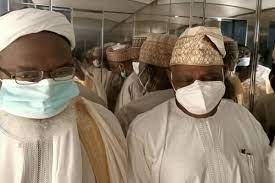 The former President, Olusegun Obasanjo, and the renowned Islamic cleric, Ahmad Gumi, have recommended that the Federal Government double efforts towards ending banditry, kidnapping, and other criminalities as well as establish a special court for prosecution of perpetrators across the country.

They also recommended that the apex, state, and local governments should urgently design measures to pick the over 14 million out-of-school children off the streets and enroll them for proper education as a long-term measure to end the insecurity and forestall future reoccurrence in the country.

The recommendations were contained in a communique issued after a closed-door meeting between Gumi-led delegation visited Obasanjo in Abeokuta, Ogun State on Sunday following the recent attacks across the country by suspected bandits.

In a 20-point recommendation issued after the meeting, they stressed further that banditry, kidnapping, and other forms of criminalities been perpetrated across the country were not synonymous to certain ethnic groups and urged that Nigerians should desist from religionising and regionalising these crimes.

The delegations noted that considering the untold hardship and pains inflicted on Nigerians by bandits and other criminals, the government should adopt the carrot and stick mechanism, saying, accept those that are ready to leave the crime, settle them and give them skills, empower them and let them have employment.

For the stick strategy, they argued that the federal government should seriously punish anyone found carrying arms against Nigerians, adding, special courts should be created to deal promptly with cases of banditry, kidnapping, ransom demanding, and unlawful carrying of weapons.

The communique further reads: “Since the end of the civil war, the military are the strongest and most potent instrument and symbol of national unity that we have and we must keep them so.

“State governments must have adequate means of providing security for their people and as chief executives and chief security officers of their states, they must have the means at their disposal to ensure security for all within their states.

“Federal government must be proactive, secure necessary and updated intelligence to deal with organised crimes and have common policy for the nation. It is not solving the problem when one state goes for negotiation and molly-cuddling of criminals and another one goes for shooting them. Nor should one state go for a ransom payment and another one going against.

“The Federal government should take the issue up seriously within Economic Community of West African States (ECOWAS) to work for a regional solution.

“Also, every community must be encouraged and empowered (by the federal, state, and local) government to stand firm and strong against criminals.

“(Also the governments should ensure) protection and reward covertly for whistleblowers against criminals living in the community” across the country.

“Education is one main key to solve the problem in the long run but it must start now. The 14 million children that should be in school and are out of school must be put in school with local authorities, state governments, and federal government working together”, it added.