20 passengers die, three others injure during auto crash in… 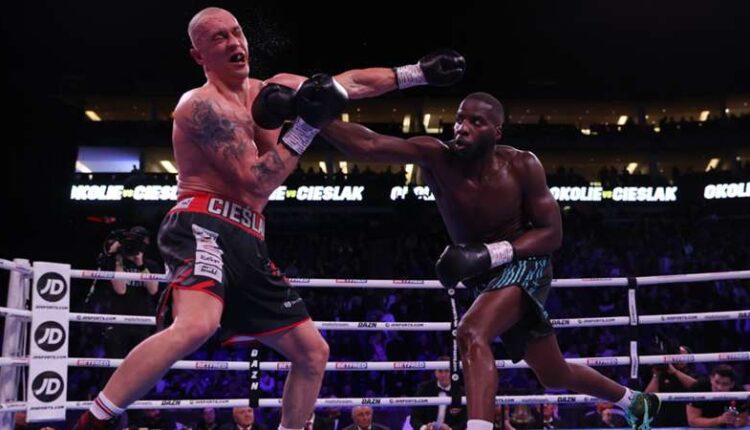 The Nigerian-British boxer, Lawrence Okolie, has retained his WBO cruiserweight belt with a comfortable points victory over his opponent, Michal Cieslak.

Okolie, who is known for his heavy punches, brought down the Polish challenger in the fifth round of the bout to instill fears into Cieslak.

The 29-year-old, in spite of the advantages, was not at his fluent best in a bout where both men continued to grapple and hold.

Speaking on the victory, Okolie said: “It was a flat performance and I allowed it to get messy. This was one of those days where it was tough, awkward, and the guy was physically strong, but I need to work on the mentality that it doesn’t need to be perfect. I will go back to the gym, go again, and make it right the next time.”

Primetime boxing on a Sunday evening is a rarity and in the build-up, to the main event, there was a somewhat more placid, yet intimate, atmosphere compared to regular world-title fight nights.

But the 6,000 fans in attendance certainly made themselves heard when Okolie entered the ring alongside former heavyweight champion and mentor, Anthony Joshua, and UFC middleweight champion, Israel Adesanya.

There was also huge Polish support for Cieslak, as the arena at times resembled a football ground with chants exchanged between the home and away fans.

Okolie edged the first round with a huge right which landed cleanly in an otherwise scrappy start.

The fighters engaged in more clinches and smothered each other’s advances in rounds two to four but Okolie – with effective jabs to the body – was doing enough to control the fight and win the rounds.

By the fifth round, Okolie had found his range and looked light on his toes. A chopping right glanced the top of Cieslak’s head and then moments later Okolie countered with another right and the challenger was down on one knee.

Cieslak shook off the knockdown and recovered well in the sixth round. He connected with an uppercut in the seventh and a straight left while Okolie was backing away in the eighth – but the champion was the busier fighter.

Okolie twice landed cleanly in the 10th round but as the fight headed to its conclusion, both men started to get more reckless and the holding seemed to worsen.

Despite the ungainly and often ugly nature of the fight, as the final bell rung there was no question as to who the winner was.