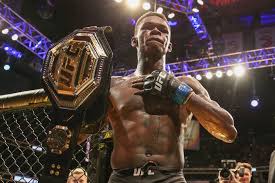 Share
Nigerian-born Ultimate Fighting Championship (UFC) middleweight champion, Israel Adesanya, has retained his title after knocking out his Brazilian opponent, Paulo Costa, early in the bout.
The victory has increased Adesanya’s record to 20 wins and no loss while his challenger, Costa, winning run came to an end after his 14th bouts, totalling 13 win and one loss.

At the first round of the bout fought at Yas Fight Island, Abu Dhabi, United Arab Emirates on Sunday, there was with less action as both MMA fighters traded few kicks and punches with Costa pressing the champion but throwing few shots.

Adesanya came out with more purpose in the second round, outboxing and landed deadly shots that disorganized his opponent who fell on the canvas, just as he rained more ground punches to ensure his challenger does not recover.

After the referee signalled Adesanya to stand, Costa was left bloodied and bruised on the canvas, as his undefeated record was ended, and he needed medical attention afterwards.

In an interview after retaining his belt, the Last Stylebender, as he was fondly called, said that his aim was to erase all existing records in his category.

Adesanya said: “I said it before, Anderson Silver left a huge legacy in this division and I said I wanted to do service to the middleweight division and that’s a tough act to follow, but we’re doing the work,” he said after the fight.

“I already messaged Jared Cannonier, he is a hell of a dude. I love his energy, I said, you destroyed Robert Whittaker, you are next. He’s the one I want to fight next.”