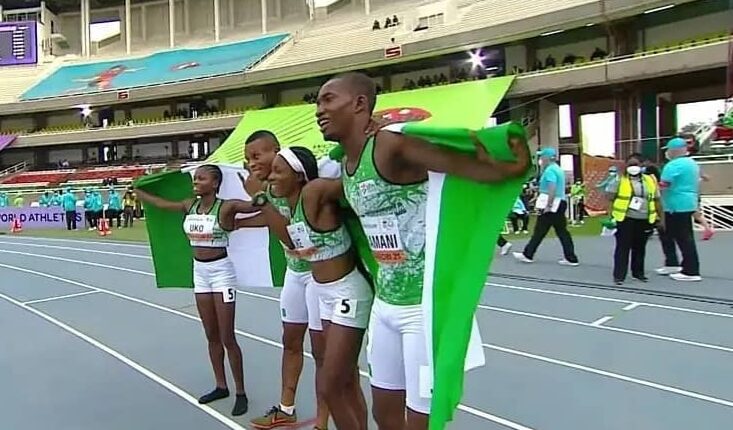 The Team Nigeria athletes participating in the 4×400 mixed relay at the ongoing Junior World Athletics Championships have won gold, outsmarting Poland and India to second and third places respectively.

The quartet of Johnson Nnamani, Imaobong Nse Uko, Opeyemi Oke, and Bamidele Ajayi proceeded to set a Championships Record and won the country’s inaugural gold at the competition with 3minutes and 19seconds

During the race on Wednesday, the quartet defeated Poland (3:19.80) and India (3:20.60) to make history as the first winners of the event that was introduced at the World Athletics junior Championship holding in Nairobi, Kenya after its success at the just concluded Tokyo Olympics.

Speaking on the feat, the minister of Youth and Sports Development, Sunday Dare, said that he was optimistic that the victory would be the beginning of Nigeria’s dominance in athletics.

He said: “I want to specially congratulate our U20 team for making history in Nairobi. This gold is for all Nigerians and this should serve as the perfect start the new board of the Athletics Federation of Nigeria needs to correct the ills of the immediate past and return Nigeria among the major athletics nations in the world.

“I also remember we won the women’s 400m in successive editions (1990 and 1994). Who will forget how Francis Obikwelu became the second sprinter to win the 100m and 200m in 1996 in Sydney, Australia?,’ asked the Sports Minister who has challenged the AFN to build on the successes it will record at this championship.

“I am calling on the AFN to ensure the athletes discovered here are monitored and given the necessary encouragement to make them follow in the footsteps of their predecessors like (Falilat) Ogunkoya-Omotayo, Mary Onyali, Ese Brume, Chioma Ajunwa and Blessing Okagbare who grew to become individual Olympic medallists for Nigeria,” he said and revealed he will be staying glued to his television to watch ‘our future champions’ as they strive to bring honour and glory to their fatherland”.