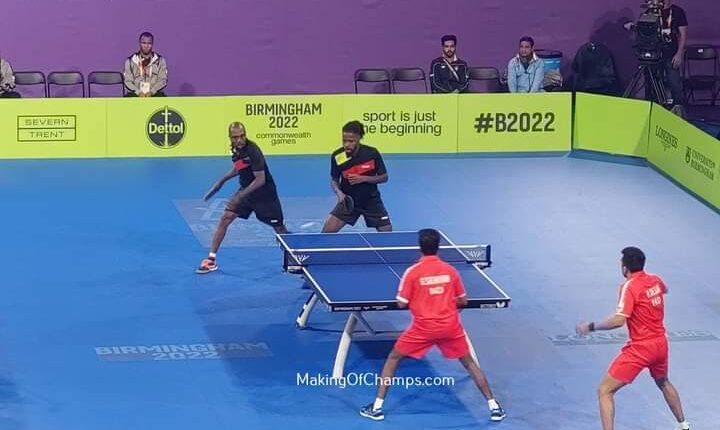 Nigeria’s hopes of increasing its gold medal at the ongoing Commonwealth games in England through its men’s table tennis team has ended after the team lost 3-0 to India during their semi-final encounter in the game.

The Nigerian team led by Aruna Quadri could not outsmart the Indians who ensured that won the Doubles 3-0, the first singles 3-1, and the 2nd singles 3-1 to progress to the final.

Following the outcome of the encounter in Birmingham, Nigeria will now play England in the 3rd place match, in a bid to pick the last medal in the team’s category at the games.

The Nigerian duo of Abiodun Bode and Omotayo Olajide could not kick start the victory for the team after they lost 3-0 in the doubles against Desai Harmeet and Gnanasekaran Sathiyan of India.

The Indian pair took the three sets 11-6, 11-7, 11-7, ensuring that the Nigerian players do not extend the game beyond the first three sets before progressing to the second.

In Nigeria’s second game, Aruna Quadri, the world number 12, fell to his opponent, Achanta Sharath Kamal, 2-1 after coming from behind to win the second set.

Achanta took the first set 11-9 while the world number 12 dug deep in the second set to take it 11-7, but his effort to propel a comeback for the Nigerian team ended after committing two errors to allow his opponent to end the last set at 15-13.

The second single game between Omotayo and Gnanasekaran also ended 3-1 in favour of the Indian player with the Indian winning the first set 11-9 while the Nigerian took the second set 11-4.

But Gnanasekaran took the third and fourth sets 11-6, 11-8 to send India to the final of the team’s category. Team Nigeria will take on England in the third-place match at the NEC 3 court. Team India will also face Singapore in the final after the third-place game.