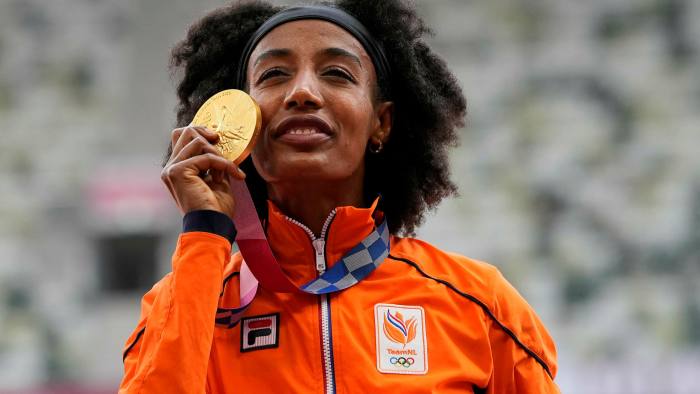 Hassan, an Ethiopian-Dutch middle- and long-distance runner of Oromo descent, won gold medals in both 5,000 and 10,000 meters race after claiming Bronze in 1,500, becoming the first female athlete at a single World Championships or Olympic Games to win medals in the three events.

The 28-year-old athlete, who won the 10,000 race on Saturday to complete the trio, had two years ago during the 2019 World Championships won two gold medals in the 1500 meters and 10,000 meters events, becoming the only athlete in history to repeat such feats at both competitions.

Hassan, who left Ethiopia as a refugee for the Netherlands in 2008 at age 15, embraced athletes while undertaking studies to become a nurse, won the race 10,000 metres race ahead of Bahrain’s Kalkidan Gezahegne, and world record holder, Ethiopian, Letesenbet Gidey.

She started the race with 5000m and after taking gold, having recovered from a fall in the 1500m heats earlier on the same day, the Dutch runner came up short during 1500 metres final.

During the race, she tried her hardest to stretch the Rio 2016 champion, Faith Kipyegon, but the Kenyan stayed with her and sprinted clear to retain her title with Britain’s Laura Muir passing Hassan for the second position.

Reacting after her victory, she said after her 1500m bronze, “I am very happy with my race. There was a lot of wind at the stadium today and that made it difficult for me. I can’t do anything about that, I just didn’t have any more strength. I am happy with how it all goes (so far), but I feel stressed every day”.