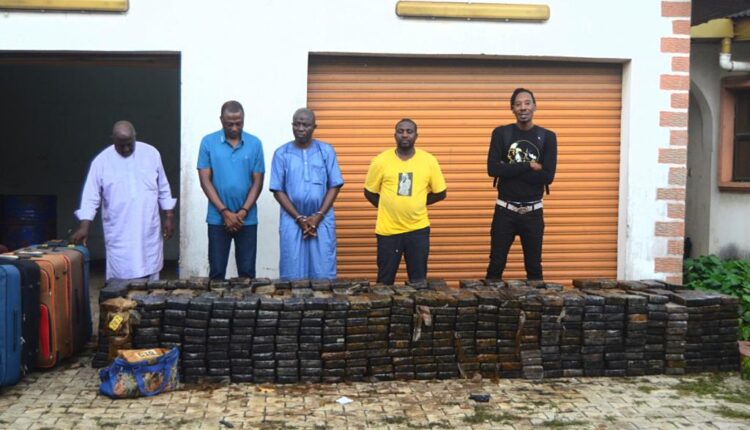 Share
A 42-year-old Jamaican national, Kelvin Smith, and four others have been arrested by the National Drug Law Enforcement Agency (NDLEA) for allegedly being in possession of drugs worth over N1 billion in Ikorodu axis of Lagos State.
Other four suspected drug barons were: two indigenes of Ibadan, Oyo state, 69-year-old Soji Jibril and 53years old Wasiu Akinade; 65-year-old Anambra State indigene, Emmanuel Chukwu, and a 53years old from Ondo State, Sunday Oguntelure.
As gathered, they were members of an international drug syndicate that the anti-drug agency had been trailing since for over four years in the country.
The Guild learnt on Monday that they were picked from their hideouts in hotels and other parts of Lagos during a raid that lasted for over 24 hours within the state.
After their arrest, the NDLEA officials also impounded 1,855 kilograms of drugs found in their warehouse sited at 6 Olukuola crescent in Solebo Estate, Ikorodu Local Government are of the state.
The spokesperson, NDLEA, Femi Babafemi, disclosed the five men arrest through a statement released and made available to newsmen in the state.
Babafemi, who said that the suspects were kingpin of the cocaine cartel in Lagos, added that the class A drugs stored in 10 travel bags and 13 drums were warehoused in the residential estate from where the cartel sell them to buyers in Europe, Asia and other parts of the world.
According to the statement, While commending all the officers and men of the Agency involved in the extensive investigation including those of the American Drug Enforcement Administration, (US-DEA), Chairman, NDLEA, Brig. Gen. Mohamed Buba Marwa (Retd), said that the bust is a historical blow to the drug cartels and a strong warning that they’ll all go down if they fail to realise that the game has changed”