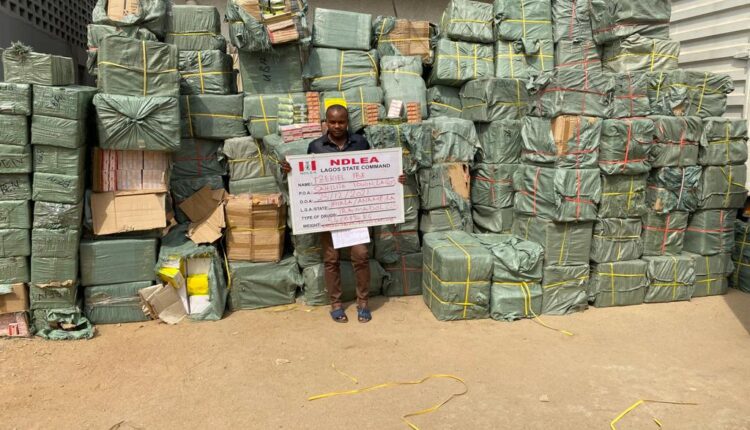 Share
The National Drug Law Enforcement Agency (NDLEA), has arrested and detained a drugs kingpin after being found in possession of 8,381,600 capsules and tablets of Tramadol as well as 56,782 bottles of codeine among others during a major raid across Lagos state.

These drugs were recovered by the anti-drug agency during an intensive raid of the popular livestock and ram market, Alaba Rago, and Satellite town in Lagos.

During the raid across Satellite town, one of the drugs kingpin, Ezekiel Ibe, was arrested and detained after over five tons of high milligrams Tramadol; 225 milligrams, and 100 milligrams were recovered from his warehouse.

Speaking on the arrest and impounded drugs, Director, Media and Advocacy for NDLEA, Femi Babafemi, disclosed that the operation was directed by the Chairman, Brig. Gen. Buba Marwa (retd) that enforcement should be intensified.

According to him, Marwa ordered that the officials sustained surveillance on some targets at Satellite town and Alaba Rago areas of Lagos.

He assured the drug peddlers that the leadership of NDLEA would continue to frustrate any plans to either transport drug from Nigeria or use the country as transit location for trafficking to other countries.

“In another raid on Monday 20th December following tasking surveillance in a notorious neighborhood at Alaba Rago, Alaba area of Lagos, one Surajo Mohammed was arrested with 941.14kg cannabis while 56,782 bottles of codeine were seized from the store of another drug lord still at large”.