JUST IN: Mbaka reappears after Catholics violent protest in Enugu 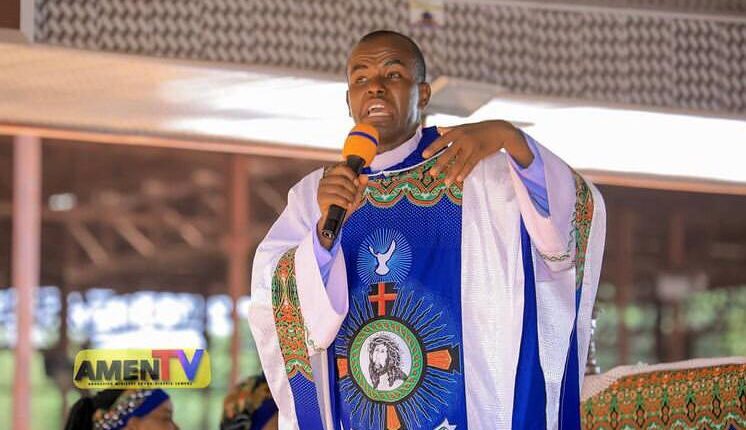 The Spiritual Director, Adoration Ministry in Enugu State, Fr Ejike Mbaka, has resurfaced after his reported sudden disappearance on Wednesday that led to violent protest in Enugu State.

The fiery Catholic Priest arrived at the Catholic Bishop’s Residence in a motorcade amidst jubilation from his Adoration faithful around 2.45 pm.

He, however, stopped in front of the Bishop’s Court and addressed his supporters urging them to remain calm and return to the Adoration ground for further information.

Notable Nigerians, including Catholic church members and Ohanaeze Ndigbo Youth Council Worldwide, protested and raised concerns over reported disappearance of the cleric with many pointing accusing fingers at security agencies in the state. Mbaka.

It was gathered that church members protesting the cleric’s whereabout stormed the place alleged to have been last visited by Mbaka and destroyed property alongside other valuables.

The congregants and other well-wishers were said to have caused traffic gridlock in the state’s capital on Wednesday while marching to the Catholic Bishop of the Enugu Diocese, where the cleric allegedly visited last before his whereabouts became unknown.

The Guild gathered that upon getting to the Bishop’s court, security agencies have cordoned off the building preventing the onward march of the angry demonstrators.

Angered by the development, the protesters were said to have started destroying valuables in sight, including glasses and other artifacts around the building.

The irate youths vandalised the official residence of the Catholic Bishop of Enugu Diocese, Most Rev. Callistus Onaga, in protest of the alleged arrest of Mbaka.

The youths suspected to be members of the Adoration Ministry and numbering over 1,000 stormed the residence of the Bishop located at Igboeze Street, Independence Layout. The protesters accused the bishop of masterminding the alleged arrest of the priest by unidentified security personnel.

The protesters claimed that the last call Mbaka received was a summon by Bishop Onaga and that the cleric had gone visiting the bishop, adding that the court’s was his last port of call.

Reacting to the development, the President, Ohanaeze Ndigbo Youth Council Worldwide, Okwu Nnabuike, claimed that the whereabouts of the cleric was unknown and that it was important Mbaka be produced to avoid civil unrest in the country.

“We are giving the Federal Government 48 hours to produce the priest, else they should be ready to face Igbo youths. They were dining and wining with him all along and now that he told the truth, they are no longer comfortable with him.

“Let nothing happen to Rev. Fr. Ejike Mbaka. It will not be in anybody’s interest,” Nnabuike said in a statement on Wednesday.

Meanwhile, the Department of State Services (DSS) denied it arrested the cleric, saying the media reports about the agency arresting Mbaka were false.