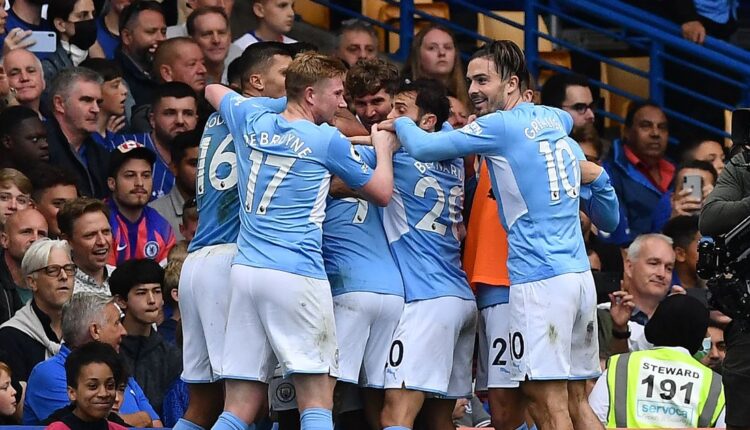 The English Premier League defending champion, Manchester City, has defeated Chelsea Football Club, 1-0, during their week six league match and move into the second spot on the 2021-2022 league standing.

Manchester City’s victory over Chelsea, during the match tagged as a replay of last season’s Union of European Football Associations (UEFA) champion’s league won by the London’s club, ended Chelsea’s unbeaten run in the current season.

Aside from that, the match on Saturday ended Chelsea’s unbeaten run, it also marked the first victory for Manchester City manager, Pep Guardiola, over his German counterpart, Thomas Tuchel, after his appointment as the London club’s manager, as three previous encounters had ended in Tuchel’s favour.

Before the match played at the Stamford Bridge stadium, soccer pundits had predicted victory for the London club but in the 53 minutes of the game, Brazilian forward, Gabriel Jesus, get past Chelsea’s goalkeeper, Edouard Mendy, after slotting in the pass received from his teammate, Joao Cancelo, to ensure Manchester City take the lead.

To salvage a point and possibly win the game, Tuchel introduced Kai Havertz, his fellow German, seven minutes after their opponent took the lead but he could not repeat the feat achieved during last season’s UEFA Champions League final where his strike ensured Chelsea lift the trophy.

At the 76 minutes of the game watched 41,040 spectators, the Chelsea manager substituted the Italian Euro Cup winner, Jorginho, and brought in Ruben Loftus-Cheek but the efforts could not yield any positive result, rather, the Manchester club pilled additional pressure on them and missed many scoring chances.

The loss came after Chelsea strengthened its squad with a top-class centre-forward in Romelu Lukaku, and a victory at Stamford Bridge over the reigning champions on Saturday, then, would have laid a significant marker and moved the west London outfit a noteworthy six points clear of City.

Instead, Guardiola sent a loud reminder that he remains the sorcerer, not the apprentice, and his side was not about to give up the title without a fight.

City’s 1-0 win here was a tactical masterclass from the Catalan. From the first minute, his side took control of a huge game, pushing Chelsea back into their own half with a front three of Jack Grealish, Gabriel Jesus, and Phil Foden – playing as a false nine – hunting in packs to make life uncomfortable for the home side’s backline.

Behind them, N’Golo Kane was forced to man-mark Kevin De Bruyne to limit the Belgium playmaker’s influence, but City’s full-backs reacted by playing high up the pitch to keep the home side boxed in.

Perhaps Guardiola’s biggest decision was to drop Bernardo Silva into a deep-lying midfield role, allowing the Portuguese to play alongside Rodri and dictate the game’s tempo.

In the disastrous Champions League defeat in Porto, Guardiola had gambled on Ilkay Gundogan playing the role alone, and City was overrun.

This time, though, they dominated, claiming two-thirds of possession and forcing Chelsea to uncharacteristically launch the ball high and wide just to relieve the pressure on at least three occasions before half-time.

The demeanour of the two managers could hardly have been different. An angst-ridden Tuchel gesticulated at his players furiously, argued with the fourth official over minor incidents and brooded on the edge of his technical area. Guardiola, meanwhile, was strangely calm, joking with his coaches after almost tumbling out of his seat after watching a Jesus shot disappear narrowly over.

His one frustration may have been that Grealish was struggling to influence the biggest game he has played since his £100 million switches from Aston Villa. That changed in the second half after a word in the dressing room, however, as the England international grew into the game, carving out good opportunities for Jesus and De Bruyne.

The deserved breakthrough came in the 53rd minute through Jesus’s deflected strike, but an expected reaction from the home side never came as City kept Chelsea at arm’s length.