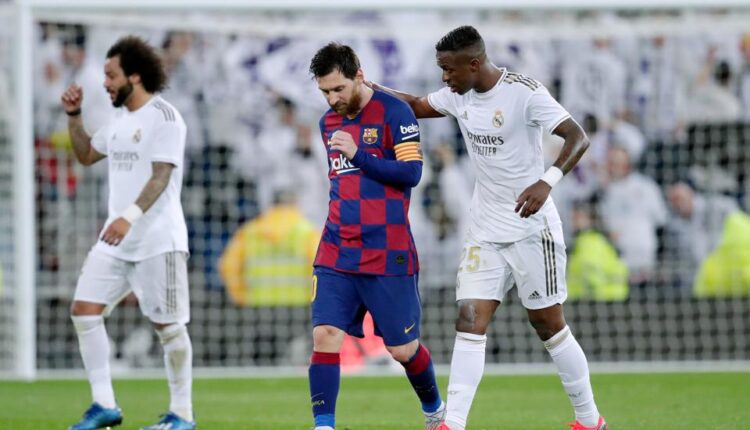 The Spanish club, Real Madrid, has occupied the La Liga league summit after defeating their arch-rival, Barcelona two goals to one during the second leg of 2020-2021 El-Classico.

Following the victory, Madrid increased its points to 66 and unseated Athletico Madrid that is also on 66 points but with a match at hand, facing Real Betis on Sunday.

It’s the first time in 2021 that a team other than Atlético has held the top spot in La Liga after Atlético blew a 10-point lead.

Zinedine Zidane’s side was powered by two first-half goals, including an all-world effort from Karim Benzema. In the 13th minute, the French striker back-heeled a pass from Lucas Vázquez that snuck past Barça keeper Marc-André ter Stegen for the opening goal.

Real doubled its lead in the 28th minute when midfielder Toni Kroos’s free-kick deflected off the back of USMNT fullback Sergiño Dest and then off Jordi Alba’s head before glancing in for the goal.

While Barcelona was able to pull one back in the 60th minute through Óscar Mingueza goal, the Catalan side couldn’t manage to secure an equalizer despite a hectic final half-hour in the pouring rain, which included a denied penalty shout in the 84th minute and a shot off the crossbar in the 94th.

After the first chance occurred, the French striker had one option only: to go with a backheel at Marc-Andre ter Stegen’s near post. And he pulled it off with the confidence of a player who has scored nine goals in his last seven league games.

He has been Madrid’s key man since Cristiano Ronaldo left and if they win the title again, he will deserve a huge portion of the credit for shouldering the load in the attack.

Behind him is a midfield that has won it all but still wants to do it all over again, and it was the in-form Toni Kroos who converted the second with a deflected free-kick from the edge of the box.

It was Madrid’s first goal from a free kick in a Clasico since Roberto Carlos in 2000, although the German’s effort was well below the legendary Brazilian’s standard.

Sergino Dest turned his back on Kroos’s effort and the ball slapped off him, with the American proving more of an open gate than a solid wall. Jordi Alba got his head to the ball on the line, but could not head the deflected strike away to safety.

Barcelona wanted a penalty when Ferland Mendy clashed with Ousmane Dembele in the area, and while it fell into the ‘seen them given’ category, the fact is Madrid were good value for their 2-0 lead.

The Catalans improved shortly before the break, with Lionel Messi striking the post directly from a corner and then forcing a sharp save out of Thibaut Courtois.