Gunmen move away millions of naira during Nasarawa finance… 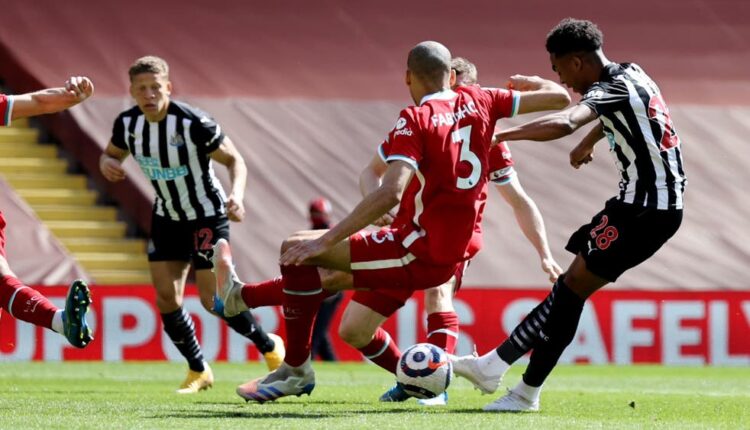 The English Premier League (EPL) defending champion, Liverpool Football Club, hopes of playing in next year’s champion’s league has suffered a major setback after the team drew 1-1 at home against Newcastle in Anfield.

Liverpool, who opened the goal chart three minutes into the game through their Egyptian forward, Mohammed Salah, could not double their lead after, missing several scoring chances, which resulted in the team conceding a goal at 95th minute of the game.

The goal for Newcastle, which was scored by Joe Willock, was deflected into Liverpool net by Fabinho while trying to prevent the substitute from leveling the game for the visitors who were denied a goal earlier by Video Assistant Referee (VAR).

VAR ruled that the goal scored by Callum Wilson after his strike hit Liverpool, goalkeeper, Allison Becker, hit his elbow and fell at his foot from where he sent it into the net.

Reacting over outcome of the game, Liverpool manager, Jurgen Klopp said: “I don’t think you can create much more chances, better chances. But we don’t finish the game off. We didn’t play enough.

“We have to keep going, keep playing. But we kept them alive. And they deserved the goal because they scored before. It is another one with the new rules, unlucky for Wilson but it is hand ball, and we don’t even take this present. We were lucky with that decision, but gave another chance away and it makes no sense. It’s really tough to take.

“Why it happened, I don’t know. How it looked, I saw: you just have to keep the ball. In a specific way, we don’t fight enough. We had 70 percent of the ball and should have 80, we created a lot of chances. So we had to create more and use them.