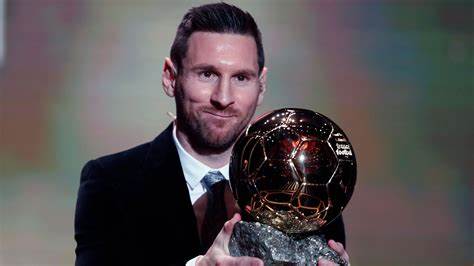 The Argentine forward, Lionel Messi, has won his seventh Ballon D’ Or after being adjudged the winner of the 2021 edition of the prestigious award for his contribution to the national team winning their Copa America trophy.

Messi, after lifting different trophies with the Spanish giant, Barcelona, captained the national team to their first Copa America after several years of attempting without any success.

He polled more votes than Bayern Munich and Poland forward, Robert Lewandowski, to the award after the nominees were streamed down to two from 30 earlier shortlisted for the award.

The Polish forward was however adjudged the best striker in the year after scoring about 70 goals for club and country during the period under review.

The winner of the female version of 2021 was Spain and Barcelona’s midfielder, Alexia Putellas, and she was given the award for her contribution to the national team and club football.

Pedri of Bercelona won the Kopa Trophy, an award for young footballers, peeping Jamal Musiala of Bayern Munich, Nuno Mendes of Portugal, Mason Greenwood of England to the award.

Ther Italian and Paris Saint Germain (PSG) goalkeeper, Gianluigi Donnarumma, won the Yachine award as the best in his department.

One of the English football giants, Chelsea, was awarded the winner of the best club in 2021 after lifting their second Union of European Football Association (UEFA) champion’s league title during the year.

Putellas has been a mainstay in the Barca team since joining the club from Levante back in 2012, racking up over 350 appearances across all competitions.

The 2020-21 campaign was arguably the 27-year-old’s best yet as she led the club’s successful treble charge, and she has now been rewarded with the most prestigious individual award in the game.

The award was given to the player after recording a staggering 37 goals and 27 assists last season as Barca stormed to success in the Primera Iberdrola, Copa de la Reina and Women’s Champions League.