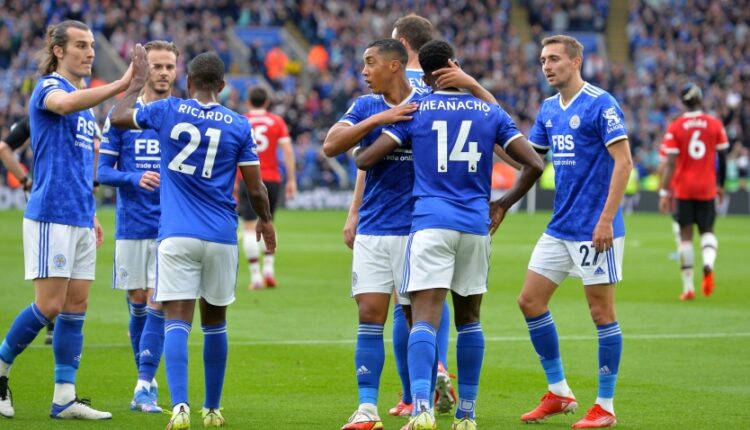 The English football giant, Manchester United, has been edged out of the Union of European Football Associations (UEFA) Champions League spot on the Premier League table after losing 4-2 away to Leicester City.

Manchester United, before the match played at the at King Power Stadium, home ground of Leicester City, was occupying the fourth spot on the Premier League log but the defeat caused the Old Trafford club to drop out of the champions league zone on the table, yielding their spot to Brighton & Hove Albion Football Club.

During the match on Saturday, Manchester United, inspired by Cristiano Ronaldo’s presence, took the lead 19 minutes into the game through Mason Greenwood.

At the edge of the box, Greenwood decides to take another strike from distance and flies past Kasper Schmeichel, onto the post, and into the net.

Leicester City equalized through Belgian forward, Youri Tielemans, after Kelechi Iheanacho robbed Manchester’s defender, Harry Maguire, high up the field and lay a pass to Tielemans, and the Belgian scored a Messi-esque side-footed beauty that loops over De Gea and into the far corner.

At restart of the game, second half, Leicester took the lead, with Caglar Soyuncu, scoring after some penalty box pinball at 78 minutes, following a corner. The Foxes had been pushing and they get the goal they were searching for.

After scoring, Soyuncu went further to keep Marcus Rashford onside and the striker leveled the game at 2-2, to mark the forward’s return from a long-term layoff.

A minute after Manchester United equalised, Leicester retook the lead with Jamie Vardy firing in a special volley, to send thousands of fans at the stand into wild jubilation.

The woes of Manchester United were further compounded after Brendan Rodgers brought in Patson Daka and the player justified his introduction after scoring a goal at 91 minutes of the game.

Daka, who replaced Iheanacho at the 77 minutes of the game, scored after turning the ball in at a freekick to make it 4-2 to Leicester with just a few more minutes of stoppage time remaining.