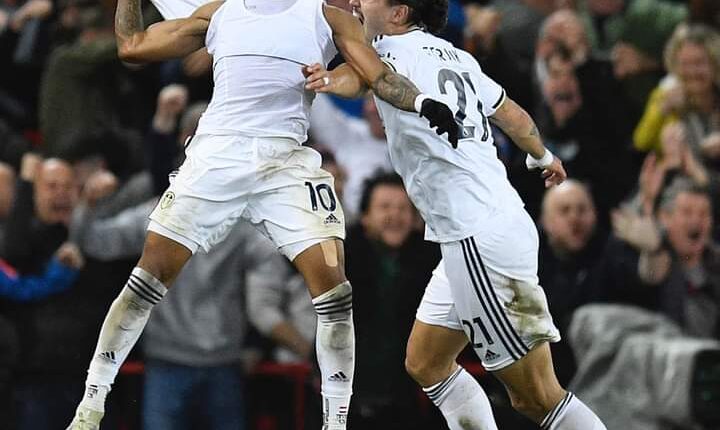 The English premier league giant, Liverpool’s effort to move up on the league table has suffered a major setback after losing 1-0 at home to Leeds United, a club battling relegations.

Believes of management members and fans of Liverpool was that the team would consolidate on its victory recorded during the UEFA champions league match against a Netherland football giant, Ajax FC, but the team lost its game against a team battling with relegations.

During the game on Saturday, Crysencio Summerville scored a dramatic late winner for the visitors, stunning Liverpool to damage the Reds’ top-four hopes.

The hosts had lost to bottom-of-the-table Nottingham Forest in their last league outing but were hoping to build on their dominant 3-0 win at Ajax in the Champions League in midweek.

However, they made the worst possible start against a Leeds side who started the day in the bottom three when a poor back pass by Joe Gomez was pounced on by Rodrigo, who poked into an empty net.

Liverpool responded well and equalised soon after when Mohamed Salah volleyed in from Andy Robertson’s cross. But Leeds, belying their lowly position in the table, showed great hunger and desire in response to that equalizer and hit the woodwork through Brenden Aaronson.

Illan Meslier made great saves to deny Darwin Nunez one-on-one in the second half before the Leeds goalkeeper also kept out a Roberto Firmino header.

And, in the final minute of normal time, Summerville picked up the ball from Patrick Bamford before firing across Alisson to send the away support wild.

The defeat was Liverpool’s second in a row in the Premier League, leaving the former Champions League winner ninth and eight points off the top four, while Leeds move up to 15th.

This is quickly turning into a season to forget for Liverpool in the Premier League as once again a slow start to the game proved costly.

The Reds have conceded the first goal in eight of their 12 Premier League games so far and while sometimes they have been able to fight back and recover the situation, too often it is leaving them having too much to do to get back and secure victory.

The early goal in this game was wholly avoidable as Gomez, out on the flank, played a risky pass back to Alisson but sold his goalkeeper short, allowing Rodrigo to nip in and score.

Although they managed to fight back and level, they were rarely able to match the hunger and desire their opponents showed, with passes in the final third often going astray.

Hopes of fighting for the title have been replaced by aiming to finish in the top four but even that is looking a tough task unless Liverpool finds a way to improve their poor starts in most games.

Nigeria and the rise of Rishi Sunak