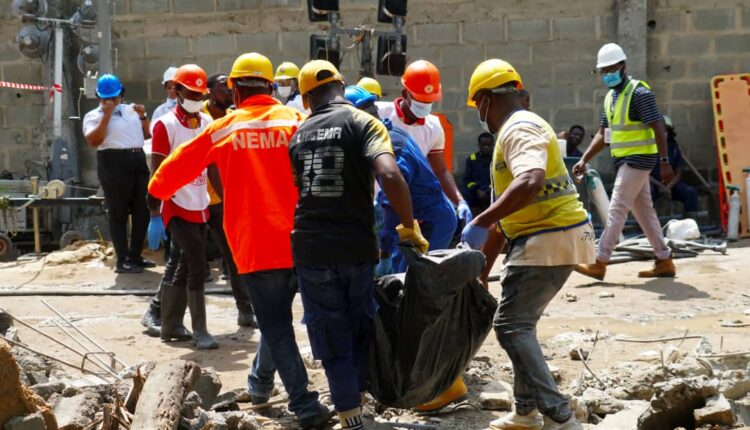 Barely 10 days after a high-rise building caved in around Ikoyi axis of Lagos State, the joint rescue team has brought out two additional bodies trapped under the rubbles, increasing the death toll from 43 to 45 and 15 others sustaining varying degrees of injuries during the collapse in the state.

Aside from that, seven more families have submitted Deoxyribonucleic Acid (DNA) samples at Infectious Diseases Hospital (IDH) in Yaba axis of the state, to facilitate identification and collection of the loved ones that perished at the collapsed high-rise building in Ikoyi.

The Commissioner for Information and Strategy, Gbenga Omotoso, who confirmed these on Wednesday through a statement made available to newsmen, meanwhile, has debunked claims that the state governor, Babajide Sanwo-Olu, had ordered that the two remaining high-rise buildings at the scene be pulled down.

Omotoso, who described the reports on the two other existing structures as a false, stated that the only truth coming out of the disaster scene was that two additional bodies were discovered under the rubbles.

“Contrary to speculations, no directive has been given for the demolition of the two high-rise buildings standing at the site of the 21-storey collapsed building in Ikoyi, Lagos. The Panel of Inquiry instituted to establish issues surrounding the collapse of the building has continued to sit and an integrity test is yet to be conducted on the buildings. It is, therefore, wrong to assert or speculate that the buildings will be demolished.

“The operation at the site of the collapsed building continues. Vehicular movement around the site has been smooth, following the reopening of the road.

“Two more bodies were recovered from the site today. The recovery of the two bodies has brought to 45 the number of bodies retrieved from the site”, he added.

On the identification of victims’ bodies, the commissioner explained that except their were hitches, all families would have the opportunity to claim their loved ones remain.

According to him, the identification of bodies of the victims of the incident has continued at IDH, Yaba, Lagos Mainland. 32 families have come forward to submit samples for DNA to identify bodies that they wish to claim. In cases where identification is clear and there are no arguments, the bodies will be released to the families.

“A committee to supervise the identification and release of the bodies has begun work. It comprises senior officials of the Ministry of Health and the Ministry of Justice