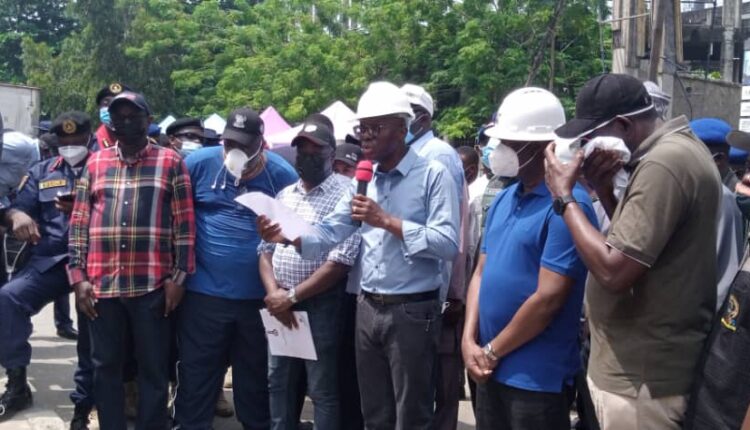 The Lagos State Government has released names of people brought out from the collapsed high-rise building in Ikoyi axis of the state, as a measure to douse tension from family and relatives of artisans and workers believed to be trapped under the rubbles of the ill-fated structure.

Also, the state government has set up a five-man panel of inquiry expected to within 30 days investigate the remote and immediate cause of the collapsed building and proffer solutions towards preventing future occurrence across the state.

The State Governor, Babajide Sanwo-Olu, who disclosed these on Wednesday during his second visit to the disaster, assured Lagosians searching for their relatives to remain calm, saying the work has been intensified to rescue everyone trapped.

Addressing pressmen during the visit, Sanwo-Olu said that three of the nine persons brought out from the rubbles had been discharged that six were currently on admission at Lagos Island Hospital in Marina.

According to him, we expect that contractors should keep the names of anyone coming into their construction site but this is not the case here. Also, it has been difficult to get the full information from the company, Fourscore Homes. This is why it has been difficult for everyone to get full details from the government.

“Since we do not have a manifest, we have set up a desk here where anyone that is missing and the relatives assumed had come to the site for any activity should visit here and put down the details of the person including the photograph.

“Aside from this, we have also created a website for a missing person, which is Lagosmind.org, where anyone missing could be reported and the officials can assist with the search”, he added.

On the panel, the governor noted that members of the five-man panel and the secretary were selected based on expertise over the years in the real estate industry.

“I have set up a high-powered commission of inquiry consisting of five members comprising professional builder, town planner, structural engineer, and legal practitioners – all from the private sector in the country,” the governor said.

The panel’s terms of reference also include ascertaining whether there was a compromise of the building codes by the developer, his contractor and statutory regulatory agencies.

Describing the event as “a monumental disaster”, Sanwo-Olu hinted that mistakes must have been made in the process of developing the collapsed structure. The Governor promised a thorough inquiry into the matter, adding that the full wrath of the law would be brought on anyone found to have compromised.

While charging the investigative team to explore all angles to determine the cause of the collapse, Sanwo-Olu said: “We’ve promised to be open and thorough in investigating the cause of the collapse. In that regard, I have set up a high-powered professional investigative panel whose membership consists of professionals outside of the Government. The panel members have been given clear terms of reference and we are giving them 30-day assignment to tell us what has gone wrong at the site.

“The panel will be finding out who the culprits are. The investigation will start with the heads of regulatory agencies. Be rest assured that if there are other people that are found wanting in the course of the investigation, everybody will face the full wrath of the law. Members of the panel are people of impeccable integrity and I will be signing an executive order to give the panel a legal backing.”

The governor, meanwhile, commended the responders for their quick response to the scene and for standing firm to ensure that the victims trapped under the rubbles were rescued.

“I commend the first responders that have been here working to see how they can bring out as many survivors as possible. It’s been a very difficult journey for all of them and we will continue to ensure that whatever needs to be done, to get to the root cause of this, will be done,” the governor added.