Ahead of Lagos Council elections scheduled for next month, the State chapter of All Progressives Congress (APC), has released names of chairman and Vice-chairmanship candidates, an indication that the crisis that rocked just concluded primaries across the state has been resolved.

From the list revealed some surprises with no fewer than two first time council chairmen not been able to secure their return ticket even after an internal agreements were reached by members of Governor Advisory Council (GAC), the highest decision making organ of APC in Lagos, that all first time chairmen be returned unopposed.
Those affected by the twist in earlier agreements that was communicated to council chairmen of the party across the state were Amuwo-Odofin council chairman, Valentine Buraimoh, and his Apapa counterpart, Owolabi Adele, who were both axed by the party.
While the Buraimoh’s ticket was handed over to former lawmaker representing the council at Lagos House of Assembly, Dipo Olohunrinnu, Adele, who did not also benefited from arrangements, slot was handed to Gabriel Kelvin. 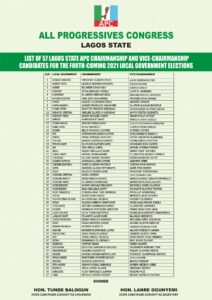 In the listed signed by State caretaker committee chairman, Babatunde Balogun, and Caretaker Committee Secretary, Lanre Ogunyemi, revealed that the party had picked incumbent chairmen for local governments that primaries were not held across the state.
The party spokesperson, Seye Oladejo, who released the list on Friday ahead of Lagos State Independent Electoral Commission (LASIEC) deadline for submission of candidates name, said that the list has been approved by APC party executives in the state.