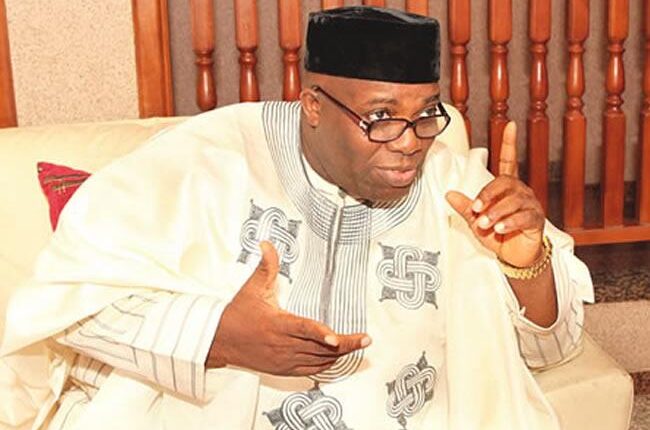 President Goodluck Jonathan’s former spokesperson, Dr. Doyin Okupe, has joined the race to secure the Peoples Democratic Party (PDP) presidential ticket ahead of the 2023 election in the country.

Okupe said that his declaration was after God directed him to join the race to succeed President Muhammadu Buhari as Nigeria’s seventh elective leader.

The former presidential aide, in an online banner released through his official social media handle on Monday, listed seven areas his administration if elected, would focus on to address the challenges facing the country.

While stating that all things were possible when one has faith in God, he promised to increase the country’s power generation to 30,000 megawatts within the first three years of his administration. 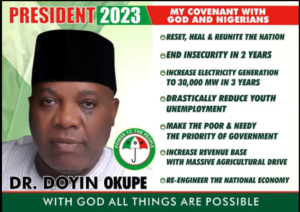 In the seven-point agenda released, the Ogun state-born politician added that insecurity particularly banditry, insurgency and other criminalities affecting peace and harmony across the country would be brought to a halt within two years of the administration.

He noted that part of the actions that would be embarked upon immediately if sworn in as the country’s next president would be to reset, heal and reunite the nations.

According to him, his administration would be introducing policies and programmes that would drastically reduce youth unemployment across Nigeria.

Unlike the previous administration, Okupe assured the indigents that lifting them out of poverty would be the priority of his government.

The President Jonathan administration’s spokesman stressed that efforts would be made to ensure that Nigeria’s revenue base increases using agriculture as a benchmark to drive the process.

Aside from all these, the Presidential aspirant opined that the administration would not limit its efforts to revenue alone, saying the country’s economy will be re-engineered to benefit everyone irrespective of their status in the country.

The public declaration came barely two months after disclosing plans to join the race for next Nigeria’s president during the 2023 general election.

Okupe claimed that former Head of State, Ibrahim Badamasi Babangida, IBB, is considering him for the presidency in 2023.

The former presidential aide noted that the criteria laid out by IBB fit his profile perfectly, adding that the former ruler must have had him in mind while reeling out the qualities for the next Nigerian leader.

“I believe when IBB was making that speech, he was talking about me. I haven’t spoken with him in a long time, I agree with all his points.

“I am part of the three individuals IBB was talking about. I am the most prepared person for the job. There is nowhere in the country I don’t have contact,” Okupe said.

The former ruler said the highlighted qualities would help the next President steer Nigeria to greatness, saying Nigeria’s next President should be a good leader, well travelled, a good politician, among others.