JUST IN: Oyo ex-Gov. Alao-Akala, passes on weeks after… 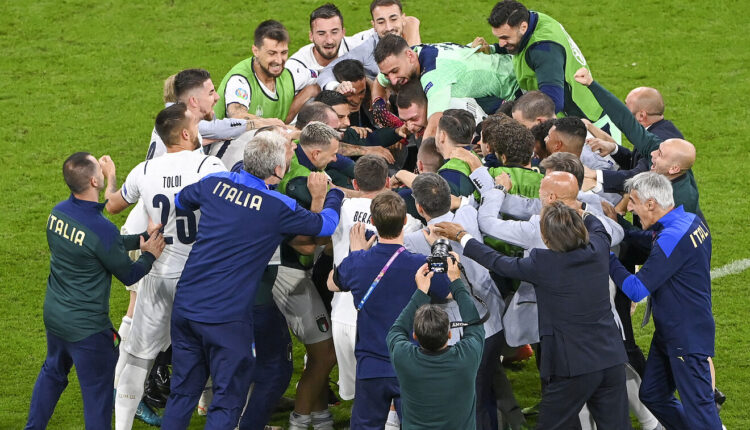 The Italian football team has denied their opponent, Belgium, an opportunity of progressing into the semi-final stage of Euro 2020 after edging an exhilarating tie with the Belgians, winning 2-1 during the encounter.

Italy’s victory over the Belgians has squared them against Spain that edged out the Switzerland team during a penalty shootout after both teams played 1-1 at end of 90 minutes.

The Italian national team popularly called the Azzurri, scored two goals against their opponent during the first half and conceded a penalty that was scored by Inter Milan striker, Romalu Lukaku, to end the game played at the Allianz Arena in Munich at 2-1.

Following this win against Belgium on Friday, the Italians took their overall victory to 13 consecutive wins and 32 games without defeat, a feat that had been described by soccer pundits as the highest quality that any national team had achieved.

The game may not have been a goal feast like some of the last-16 ties but it was an intense battle between two excellent teams playing fantastic football.

At the 31st minute of the game, Nicolo Barella wriggled through three defenders before drilling in the opener, to ensure the Italian to lead after Leonardo Bonucci’s goal was ruled offside by Video Assistant Referee (VAR).
And 13 minutes after, particularly when the Belgians had begun to put their men forward in other to get an early equaliser, Italian forward, Lorenzo Insigne, ran from the halfway line and curled in one of the goals of the tournament, leaving Real Madrid goalkeeper, Thibaut Courtois, with no option that to pick the ball after dropping down in the net.

Meanwhile, considering the number of stars paraded by the Belgians, they picked themselves up and pressured the Azzurri defence to commit errors. The errors resulted in Giovanni di Lorenzo foul of 19-year-old Jeremy Doku in the box and Lukaku scored the penalty.

Both sides had chances to score again in a breathless second half but with no goals, and the score aided the Azzurri to progress into the next stage of the competition that was delayed due to Coronavirus outbreak.

Roberto Mancini’s side faces Spain at Wembley on Tuesday but they may have to do so without impressive left-back Leonardo Spinazzola, who went off on a stretcher late on.