Over 120,000 Lagos schoolchildren to get tech skills during… 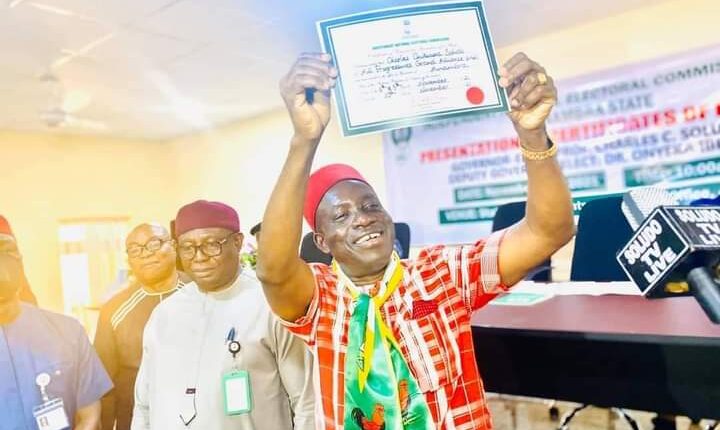 The Independent National Electoral Commission (INEC) has presented a Certificate of Return to the candidate of the All Progressives Grand Alliance (APGA), Charles Soludo, and the deputy, Onyeka Ibezim, after winning the Anambra gubernatorial election.

INEC said that the presentation of the certificate to Soludo and his deputy bwas in compliance with the provision of the law, saying there is no court injunction preventing its presentation.

The electoral umpire presented the certificate of return to Soludo on Friday in Akwa, Anambra state capital, barely 48 hours after declaring him the winner of electoral exercise held in over 19 local governments in the state.

Soludo and his deputy received their certificate of return from the INEC’s National Commissioner and chairman (Information and Voter Education Committee), Festus Okoye, with dozens of people trooping to the venue to witness the ceremony.

After receiving the certificate, the Central Bank of Nigeria (CBN) former governor thanked the people of Anambra State for giving him and his deputy-elect the mandate.

He equally extended the olive branch to other contestants, asking them to keep the “spirit of Anambra alive and strong” and “take our homeland to the moon”.

Before the presentation, Soludo sweep to victory in an emphatic style, with the Isuanioma-born banker winning 19 of the 21 local government areas of the state to clinch the position.

The 61-year-old polled 112,229 votes, twice higher than his closest rival, the Peoples Democratic Party (PDP)’s Valentine Ozigbo who had 53,807 votes.

“That Charles Chukwuma Soludo of APGA, having satisfied the requirements of the law is hereby declared the winner and is returned elected,” the returning officer for the election, Prof. Florence Obi, said while pronouncing him as the winner.

A flurry of congratulatory messages – including those from his opponents – have continued to pour in since his electoral victory.

President Muhammadu Buhari, who was among the first to congratulate Soludo on his feat, described the election as a reflection of the people’s will and said he looks forward to working with him.

“President Buhari enjoins Prof. Soludo, member of the Presidential Economic Advisory Committee, to rally other stakeholders to tackle the enormous challenges confronting the State and the Southeast in general,” presidential aide, Femi Adesina, said in a statement.

“The President looks forward to working with the incoming governor for the peace, security, and development of not only Anambra State but the entire country”.