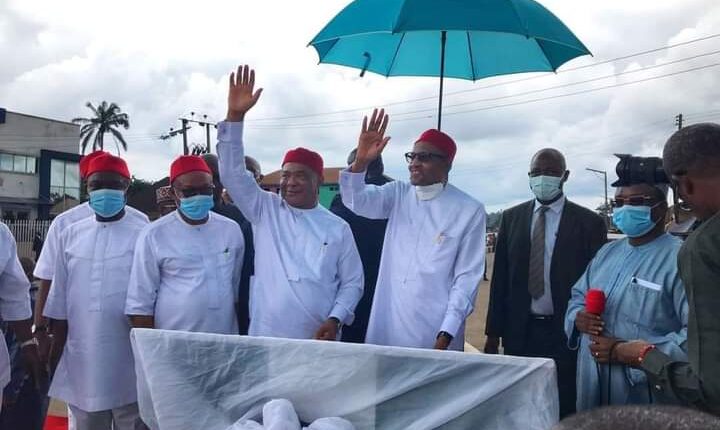 Inspite of the high inflation rate and other economic challenges that greatly affected Nigerians’ daily purchasing power, President Muhammadu Buhari has praised his administration for managing the country’s economy better than his predecessors.

Buhari said that strategies adopted by his administration, considering the resources at its disposal, have made Nigeria better in infrastructure and other facilities than the status he met about eight years ago.

The president, on Tuesday, noted that he would be leaving the country better than where he met it next year when his administration’s tenure was expected to elapse.

Addressing Imo State Governor, Hope Uzodinma, traditional rulers and businessmen as well as women during a project commissioning in Owerri, Buhari stressed that despite earning so much from crude oil, his predecessors failed to develop the country’s infrastructure.

The president frowned at the attitudes of the elites in the country who were described as trying to narratives for political gains.

According to him, the elite are not thinking hard about Nigeria, adding that though his government has done “extremely well” those who are supposed to commend his administration for their achievements have refused to speak.

“To be frank with you, I blame the Nigerian elite for not thinking hard about our country. Between 1999 and 2015 when we came in, I will like people to check the Central Bank and the NNPC, the average production was a 2.1 million Barrels Per Day (BPD). Nigeria was earning at this time 2.1million times but look at the state of infrastructure, look at the road…look at the railway, it was virtually killed. Power, we are still struggling.

He further said before he came into office in May 2015, Boko Haram terrorists controlled local governments in Borno State but that has become a thing of the past.

“Look at the problem in the North-East, check with anybody from Borno or Adamawa, how many local governments were in the hands of the government, and how many were in the hands of Boko Haram? Fraudulent people, whoever they are, are fraudulent! But now, go and ask the hardworking governor of Borno State, a very hardworking governor. Federal Government is in charge now.

“In terms of time and resources, this administration has done extremely well. I have to say it because those who are supposed to say are not saying it. I don’t know why,” the President added.

Nigeria’s insurgency war has raged on for about 13 years. Hundreds of schoolchildren and other vulnerable persons have been abducted by the insurgents.

The terrorist attacks have resulted in the loss of lives and property during bomb blasts orchestrated by the Boko Haram terror group, whose faction, the Islamic State in West Africa Province, has launched ferocious attacks in recent times.