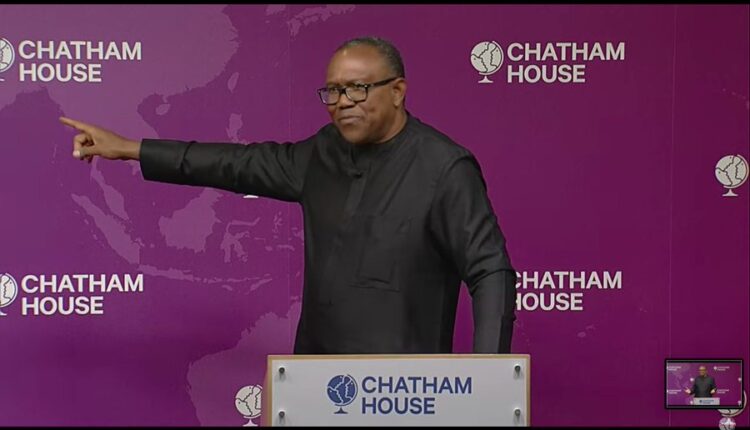 As the 2023 general election draws near, the Labour Party (LP) presidential candidate, Peter Obi, has disclosed that he would not be spending public funds on irrelevant things and rather he would save taxpayers money for future purposes if elected president during the forthcoming February election.

Obi said that rather than spend like other administrations that have ruled the country, he would be introducing a financial policy, capital formation, that would mandate that the government save public funds for future purposes.

The LP candidate disclosed the plans at the Chatham House in United Kingdom (UK) on Monday while responding to ongoing public discussion over his governance style, especially on public funds management.

Obi, an Anambra State former governor, noted that the saving strategy was what his administration introduced during his tenure to change the state’s economy and infrastructures which his successors have benefitted from over the years.

“People say that I am stingy but they do not know that at the heart of poverty is capital formation. And you cannot achieve capital formation without savings. Even in the most developed world and that was why I said that Japan owns the highest amount of treasury.

“That was what I did as the governor of Anambra State and do not forget that it earned me many awards from United Nations (UN) and others. Inspite of the achievements, I was still able to save for the state. And that was because I believe in preparing the ground for future generations.

“And that is why when you check my manifesto, I said that future generation funding, and I said that because we want to have proper capital formation to drive tomorrow. If I have the opportunity to rule the country, what we will do is introduce capital formation because we must save for tomorrow. This is because that is the solution to get capital and turn around tomorrow for the coming generation”.