Just In: I have been banned from meeting Buhari- Ortom 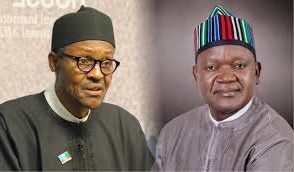 The Benue State Governor, Samuel Ortom, has disclosed that the Presidency has banned him from having discussions with President Muhammadu Buhari, saying my requests for discussion on issues of national security have been turned down without reasons.

Ortom said that he discovered the plan against him after his request to meet the President was not granted and that no reason was given on why it was approved.

The Governor noted that after his investigation, it was discovered that the Presidency had directed that his request for any meeting with the president should not be granted.

According to him, the meeting was basically to inform him of issues that could help stem the insecurity tide within the country particularly around the middle belt region, and that it was not for personal benefits.

Ortom, who disclosed the ban imposed on him during an interview on a popular Television talk show on Tuesday, said that the only medium he could express his displeasure against the President’s policies including the approval on open grazing routes was through the Nigerian media.

The governor stressed that the barrier placed against his visit would not prevent him from either commending the President when his policies were for the people and criticise him when his decisions were not right and could further disintegrate Nigeria.

He noted that one of the policies he would not accept from the President was the approval for open grazing with the review of 368 grazing sites, across 25 states in the country.

He described the president’s approval for open grazing in 2021 as taking the country back to when Nigeria’s populating was about 100 million, adding the lands are not increasing but the population does and I am sad that we are still embracing an old strategy.

According to him, I am happy that the northern governors are also not in support of open grazing rather they backed ranches, and they have made it known but it is obvious that the President has a Fulanization agenda and that has been exposed with the open grazing policy.

The president’s directive followed his approval of the recommendations of a committee chaired by the Chief of Staff to the president, Prof. Ibrahim Gambari. Among others, the committee had recommended the collection of field data collection on 368 Grazing Reserves across 25 states to assess encroachment and encroachers, stakeholder engagements, and sensitization.

The committee also recommended the production of maps and geo-mapping, tagging of sites, analysis of findings, and report preparations as well as design appropriate communication on grazing reserves and operations.

The number of the grazing reserves and states were deduced from considerations of existing security concerns and other pre-existing socio-economic conditions.

The president, through a statement on Thursday by his spokesperson, Garba Shehu, directed that the assignment be undertaken with dispatch to bring more understanding on the Grazing Reserves, and implementation.

“Among its Terms of Reference, the committee was to collate from states and confirm the status of all grazing reserves, assess the percentage of available land and those with existing encroachment complications for case-by-case resolution in partnership with state governments and the FCT.

“The committee will also make recommendations for gazetting of ungazetted Grazing Reserves and create a database of National Cattle Herders and ensure that Grazing Reserves are well communicated to all stakeholders. The inaugural meeting of the Committee was held on May 10, 2021”.