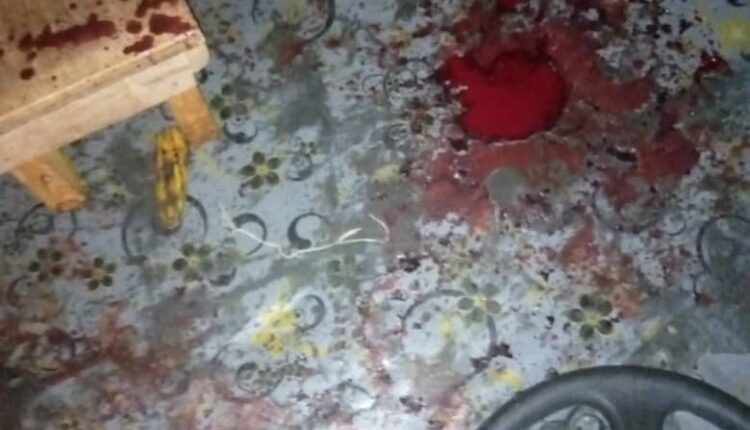 A barber popularly identified as “Keke” has stabbed a 22-years old fashion designing apprentice, Daniel Adeitan, with a knife for admiring his pregnant wife in Iwaya axis of Lagos State.

Keke had returned from work when he was said to have been informed by one of his neighbours that Daniel had admired his pregnant wife, suggesting that he might be having an affair with his wife.

After receiving the information, eyewitnesses narrated that the suspected killer of the apprentice stormed out of his apartment to confront Daniel with the knife.

On seeing him, Daniel was said to have taken to his heels, ran inside his house to avoid any confrontation with husband of the pregnant woman and with a believe that Keke would retreat.

Daniel’s hopes were dashed when he saw the Barber in his apartment with the knife with him and allegedly stabbed the apprentice in his heart area, blood gushed out uncontrollably and eventually led to his death.

Keke realizing what he had done and the legal implications that would follow, fled with his pregnant wife while neighbours and the residents gathered at the scene to ascertain what transpired between them.

Speaking with The Guild Correspondent via a phone call on Tuesday, a resident of the community living in the compound No. 3 Akintola Street, Nne Benjamin, described the incident as unfortunate and unbelievable, adding that Daniel’s sister, who was also pregnant, had pleaded with Keke to pardon him so they can resolve the issue amicably but all pleas fell on deaf ears.

According to her, the occupants of the house have vacated their apartments after the incident happened over fear of being arrested by the police since the culprit was on the run.

Benjamin disclosed that the arguments that later led to death of the 22-year-old apprentice started at about 11pm yesterday and that the entire community has been enveloped in grief.

“Everyone was scared when it happened. We had to leave our houses to invite the police because the person who committed the crime has escaped”, she added.

The eyewitness said that the Nigerian Policemen attached to the Sabo, Yaba Station, came to the scene hours after, picked the 22-year-old corpse and deposited it at the morgue, just as they assured residents of justice.

Another eye witness and neighbour, identified only as Iya Bili, who had followed the police with the body of the deceased to the station said that the police assured that investigations would be carried out and they would go after the suspect to bring him to book.

“I went to the Police Station with the family of the deceased and the body has been deposited in the mortuary. The police have promised to investigate the matter.” she said.

She further disclosed that the deceased has been deposited in the mortuary for the process of investigations to take place.

Kano Govt. bans men, women from swimming together in pool